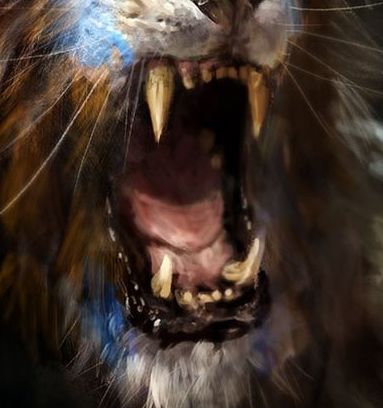 Fangs are a form of attack employed by some animals, monsters and humanoids to cause damage. Fangs are long pointed teeth used for biting and tearing flesh; in some creatures they are strong enough to break human bones. The mouths of creatures without sharp teeth are called maws; the jaw attacks of insects are called pincers; birds attack with a beak. Horses, among other creatures, bite.

Fangs are most common in carnivores and omnivores, but some herbivores like bats have them as well. They are generally used to grip and swiftly kill prey, such as with large cats; the strength of a creature's jaws can be tremendously powerful, enabling the creature to grip and hold on while others of its kind complete the kill. Omnivorous animals, like bears, use their fangs when hunting fish or defending themselves, but they are not needed for consuming fruit. Some apes have fangs, which they use in threatening and fighting.

The short canines of humans and most demi-humans are not considered fangs, but various goblinish and orcish races are able to bite effectively with theirs. However, when possible, these humanoids prefer to fight with weapons that can cause more damage, which the humanoid can afford to break. Therefore, they will only use their fangs in attack when there's no weapon available.

This is a partial list, due to be updated in future: