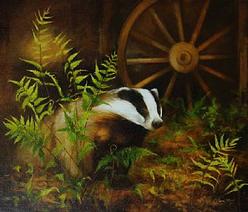 These short-legged weasels have short, wide bodies, with limbs for digging. Badgers are common throughout the woodlands of Europe, extending through temperate and subarctic climes, including coolies and riverbanks throughout the Russian steppe. They also occupy parts of China, Mongolia and Turkestan, where prairie occurs; they do not dwell in areas of sparse grass.

They can attack with dangerous, lightning speed, their attack flurry belying their apparent small bodies and few hit points. They are fierce when cornered, and will attack with a +2 to hit when in their burrows and defending their family. They have little fear of humans, and can often be found moving about villages, or in gardens and orchards within the settlement walls.

Badgers have been trapped and hunted commercially for their pelts, though they are considered to provide inferior furs; these are mainly used for trimming garments.

In some parts of Europe, most notably the British Isles and France, badger baiting is popular, in which dogs and badgers are made to fight in pens for amusement and betting. 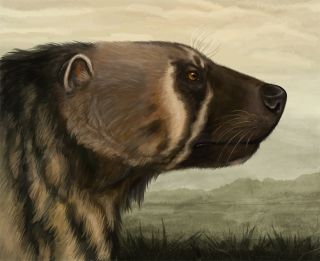 Also known as the giant badger, the chamitataxus is a carnivorous, tunneling animal with powerful claws, capable of digging into actual soft rock such as coal seams, potash or sandstone at a rate of 20–25 cubic feet per day. It is known that many do this merely to dig out a sufficient cave in order for the female to give birth to her brood, but it has been observed that chamitataxus badgers will, if they locate a dungeon, dig down into the various layers of open space in order to hunt humanoids and other meaty creatures.

The creature is slower than its smaller cousin and does not receive the +2 bonus in its lair. It does retains all, and perhaps more, of the small badger's ferocity. Many fear the sight of a chamitataxus moving along a tunnel in their underground lair, or the possibility of a child being carried off. Giant badgers will often carry their kills to their primary dens, to share the carcass among family members.

Rumours that a species of giant badger exists that has a high intelligence, is able to use tools and which dwells in large, subterranean societies, is entirely unsubstantiated. No evidence of such badgers exist.