Barbed devils serve throughout Hell as sentries, as they are never surprised — it is never unusual to find two barbed devils at any gate found through the Nine Circles of the nether region. They infamously supervise the torment of souls upon the Third and Fourth circles of Hell, cheerfully treading on victims forced to lie in vile slush, where a never-ending ice rain falls. Barbed devils also organize gangs of agonized souls struggling to roll heavy stones up a perpetual slope. These creatures particularly enjoy creating situations where persons must slave to produce nothing, as these devils delight in frustration and despair. 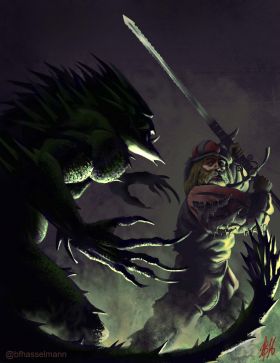 The most powerful barbed devil in Hell is Zagum, who personally commands 30 companies of the devils. Many other barbed devils populate the planes of Hades, where they answer to that ancient Greek diety of the underworld.

Barbed devils have specific abilities that are not spells. They are able to see perfectly well in complete darkness or light. This ultravision is similar to the 2nd level illusionist spell of the same name, except that it is continuous. They are also immune to normal weapons. To cause damage to the creature, it must be with a magic weapon.

Barbed devils also have immunity to many elemental attacks, such as those that employ cold, fire or gas of any type. They cannot be charmed, made to sleep or mentally affected in any way. Their minds cannot be read with ESP, or their intentions be otherwise known. Even augury and divination can provide no information on their movement or designs. Barbed devils also possess a magic resistance of 35%. They are never surprised.

These creatures are able to employ various magical powers as well, performed at the 8th level: animate dead; cause fear; hold person; know intent; produce fire; pyrotechnics; suggestion; and teleport. These abilities may be performed at will, which means they require no more than 1 action point (AP), though barbed devils can employed only one such power per round.

They have a 30% chance of summoning another barbed devil (this is also performed at will). They will resort to this ability only when they are pressed in combat, preferring to give ground and return to Hell rather than bring others forth to fight. They will make rich and continuous use of their teleport ability, moving from place to place in a combat more easily than moving even a single hex. They are known to attack, teleport, then use the remainder of their movement that round to attack again.