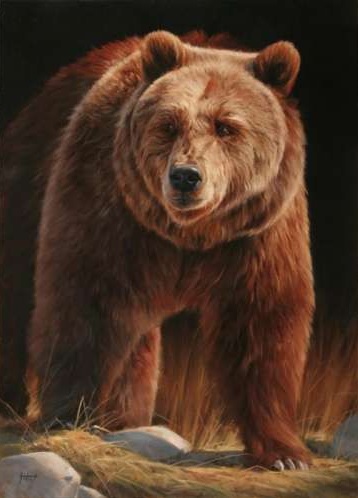 A large bear distributed through the northern latitudes around the world, with species that include the European brown bear, the Syrian and Himalayan brown bears, the Atlas bear, the grizzly bear and the white furred polar bear, which accounts for the occurrence of bears being found in the open salt sea near land. The hide of the brown bear is shaggy and the fur rough and less valuable commercially. Brown bearskins are usually shaved during tanning. Bears have been hunted for their skins and for meat. Among some humanoid tribes in the New World, the brown bear is treated as an animistic spirit.

All brown bears are thought to have evolved from a single species. They all have very large and curved claws, which may be as long as 4 inches in length. Due to the structure of their claws, and their excessive weight, adult brown bears cannot climb trees. However, they have been known to push over trees up to a foot in diameter to reach their victims.

Brown bears like to feed in the morning and evening, to avoid the afternoon heat. During the day they will loll, particularly in warm weather. They will seek shelter in a cave or under a large tree during rainstorms. They eat all summer long to gain weight for the winter months.

Broods may be up to 4 children, usually protected by a single mother. During the majority of the summer, male bears will forage on their own and will have little contact with the mother. As the children reach maturity, a pair will reunite and be seen together in the late fall, before hibernation. Brown bears hibernate for 3 to 8 months, depending on the latitude.

Brown bears are most often encountered while foraging; they will openly enter a camp while seeking food, and may even attack ponies or riding horses if food has been scarce of late (most likely due to a fire or blight). Shouting will rarely (25%) cause a brown bear to move off. If stunned, they will usually leave on their own.

If encounted underground, they are most likely to be hibernating. They will awake and act very aggressively to drive intruders away. The brown bear is most dangerous between May and July, as they are travelling with their young and will be very aggressive towards anyone they see as a threat. The animal is very territorial, though they may live near humanoids, and will threaten anyone who enters that territory, most often by making aggressive moves without actually engaging (unless provoked).