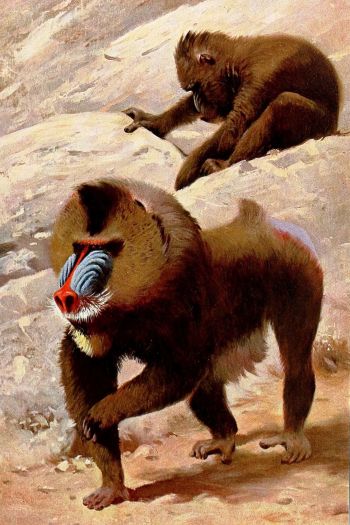 An old world monkey indigenous to Sub-Saharan and Ethiopia, as well as the jungles of the Cameroons and the basin of the Congo river. Mandrills live in large, supportive groups, sharing an omnivorous diet consisting mostly of fruits and large insects. Their mating season peaks in July to September, so that tribes will be possessed of immature infants from December to April.

Exceptionally large males may weigh up to 115 lbs. The largest are the most aggressive, but they are rarely aggressive unless directly threatened. Villagers sometimes hunt baboons for bushmeat. Alchemists have been known to hunt baboons to obtain their teeth or blood, which have unusual properties. If approached, baboons will make a great deal of noise, warning the rest of the troop to seek safety. Males that are approached will roar and make threatening movements before engaging.