Hellhounds are unearthly beasts whose origin is the Lower Planes of Existence. As they are often guardians of the gates, or entrances to the "worlds of the dead," they often released into places where the dead lay, such as graveyards and burial grounds, or to violently portend the coming of war. As the recent poet Shakespeare wrote 51 years ago,

Cry Havoc, and let slip the dogs of war, that this foul deed shall smell above the earth with carrion men, groaning for burial. 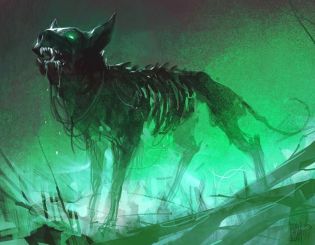 As well, hellhounds will break their chains and intrude upon the natural world, where they may remain for years until killed or reclaimed by their masters. This has given rise to many stories in many cultures, of hellbeast dogs that prey upon lone travellers, who when hunted down disappear like a fog in the night.

Hellhounds come in many forms, but consistent features seem to be mangled black fur, glowing red eyes, a ghostly appearance — often complimented by an intense red or green glow — and unusually large teeth and claws. They have sometimes been described as having three toes, and rarely possessing two heads. It is certain that the three-headed beast Cerberus, that guards the Gates of Hell, is a hellhound of singular existence.

Once free upon the world, a hellhound will settle in a region about twenty or thirty miles across, commonly around a settlement or rural habitat numbering less than a thousand people. It will begin to prey upon the residents, rarely confronting more than one or two travellers along a roadway, or who have gone off on their own. However, the hound wants more than to feed on the flesh of the living, which it relishes; it also wants to feed upon the fear of the community. If this fear is not sufficient, the hound will confront a large party, taking them by surprise, seeking to attack for two or three rounds before taking flight. The beast always prefers to attack unprepared victims rather than stay to fight; it will not do so unless it is cornered. However, the act of a short engagement will ensure witnesses, whereupon the hound's appetite for spreading fear will be assuredly sated.

When the hellhound is not under direct observation — and only at this time, as it cannot make the transformation otherwise — a hellhound's corporeal form will become vaporous, manifesting as a low-lying fog a few feet deep, covering an area a mile or more across. The hound can remain in this form for several days, slowly drifting at a speed of one mile per hour. It will coalesce only in a place where, again, it cannot be seen; but during this time, the hound will "feed" off the landscape, and particularly those moving through the fog, hunting the beast. This ability to assume gaseous form, and be mistaken for a natural phenomena, will thwart many would-be parties who are committed to ridding the land of this deadly scourge.

Hellhounds will appear in numbers only when under the control of some master, with sufficient power to manage them.

Hellhounds are difficult to approach without their being aware of it, so that they are surprised only on a 1 in 6. When stalking their victims on the other hand, these hounds are very capable of being stealthy, so that prior to their first attack, they surprise on a 1-4.

Hellhounds have very powerful jaws. When a hound rolls a natural 20, the damage done is quadruple, not double; each successive 20 then increases this multiplier by 1, so that a second 20 would mean quintuple damage and a third would be hextuple.

Most potent of all, hellhounds are known to breathe fire. This is not a natural fire, nor does it spring forth from the hound's body. This is magical fire, which passes into and through the hound's body from the plane of Hell, rushing forth from the beast's mouth when it is pressed in combat. The fire bursts forth in a surge one hex wide and two hexes long, causing 4-14 damage to all in its path. This damage is halved if a save vs. breath weapon succeeds. There is a 50% chance the hell hound will breathe each round; it is able to breathe fire and attack with its bite and claws in the same round, so that this creature is especially dangerous in a fight.