Lions are large cats most common in Africa and India, spanning a much wider range in the 17th century than many might suppose. They dwell upon open grasslands north of Persia and the Caucasus and throughout the Middle East. As hunters, the dislike dense forests, preferring open country. 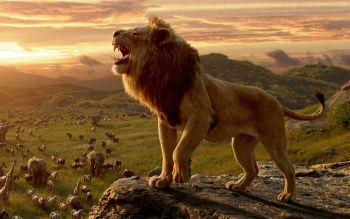 Lions are muscular, varying in colour from light buff to silvery grey, yellowish red and dark brown. Rarely, lions can be white, though this is not a sign of being albino. It's the only member of the cat family that displays obvious sexual differences between male and female. The male lion's mane is the most recognisable feature of the species, one not possessed by the female.

A social species, lions form groups called "prides," consisting of a few adult males, related females and cubs. Groups of females like to hunt together, while males tend to act as solitary hunters. Lions have been known to pull down prey as large as an elephant. When desperate for food, lions will attack humanoids — typically, lions keep their distance from settlements.

Lions spend much of their time resting; they are inactive for about 20 hours a day. Their activity generally peaks after dusk, during which time the lions socialise, groom and participate in intermittent bursts of activity lasting until dawn. Hunting ordinarily takes place during the hours as night turns to day. Their most common prey consists of large hoofed mammals.

When the lion rushes to attack, it's able to increase its movement with a pounce of four combat hexes. In such cases, if the lion hits while pouncing, an additional 1-3 damage, once only, is added due to the lion's mass. This is the amount of damage normally caused when overbearing. Defenders that are hit are forced back one hex, whether or not they're stunned.

Lions attack with their claws twice, and their fangs once. They prefer to apply all three attacks to one defender. If the lion strikes with both its forepaws, the cat gets two additional attacks — raking with its rear claws, without needing an attack die, causing 4-16 damage.

Because the lion has a keen sense of sight and smell, it can only be surprised on a 1 in 6.