The jaguar is a large member of the cat family that occurs in a wide range from the north to the south temperate regions in the Americas, through the sub-tropics and tropics. They prefer jungles to other ranges, where they exist in larger numbers. Though its spots somewhat resemble a leopard, jaguars are larger and sturdier. Some jaguars occur that are entirely black in colour. Albino jaguars, sometimes called white panthers, are extremely rare. 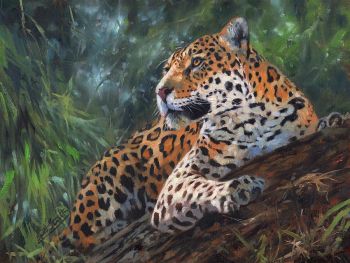 The bite is so strong that it will break the armour of alligators and turtles; when taking down large prey, it usually closes its jaws on the throat of the animal and holds on, until the victim suffocates. There are no stories of this tactic being taken with a humanoid. Typically, the jaguar eats about 3 lbs. of meat per day; because this cannot be counted on, the animal may consume up to 55 lbs. of meat at a single feeding.

Jaguars mate but do not form families. If a single jaguar is encountered, it may be a solitary male or female, though the former is more common. If two or more are found, it is most probably a female and cubs. Rarely are a mated pair found together, as they will spend only a few days mating. Mating may occur at any time of the year.

Jaguars can climb trees very skillfully, often resting on tree branches and descending from trees headfirst. When a jaguar attacks, at the end of its rush it will leap four combat hexes following its movement, enabling it to close the distance quickly with its prey. It is able to perform this leap between trees, prior to dropping down on and surprising opponents from an initial, hidden location.

The jaguar attacks with their claws and fangs. If the jaguar strikes with both forepaws, it will then get two additional attacks, raking with the rear claws, each causing 1-10 damage.

The jaguar is very observant in its habitat and possesses an excellent sense of smell; it can be surprised only on a 1 in 6.