Thought by the Romans to represent the souls of the dead, these demons are, in fact, immortal beings that normally dwell in the Lower Planes of Existence. They appear on Earth as messengers and servants, performing the work of various gods who seek to intercede in the daily course of events. 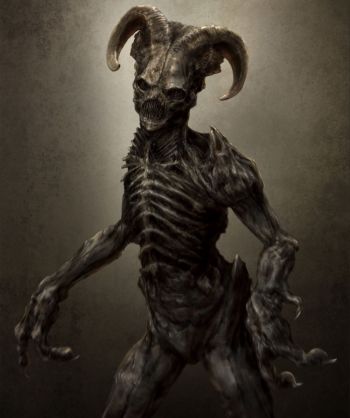 They are 99% likely to be in possession of a creature's body (it might be any creature), which is being used to disguise their true nature. They will not reveal themselves unless they are detected or the body they inhabit is killed. Manes are always able to recognize other demons who have possessed a body on sight.

Not all manes should be considered evil. Being far weaker than the gods or devils they serve, most demons would prefer to escape their duties and live out their lives undisturbed (in the body they've possessed). However, as manes will be operating with others of their kind in a loose association, to achieve the aims of their overseers, it is difficult for one manes to slip away.

Manes are immune to sleep and charm spells, as well as attacks from cold, fire, electricity or gas of any type. They can teleport and create darkness at will, cannot be hit except with magical weapons and they possess ultravision. If pressed, they will gate in another being like themselves, which merely sends a call to another manes, which teleports to the gating creature's location. These things are further explained on the Demon page.