Also draconne, a beast that formerly inhabited the high dry lands of southern France and Spain. Driven out or eradicated by the 9th century, a few rare creatures dwell between the highlands of the Atlas Mountains and the Hodh plateau near the Senegal Basin. Dragonnes are solitary in nature; it's not known if they breed, as neither a mated pair or young dragonne have been seen. It's estimated that they number fewer than one hundred creatures. 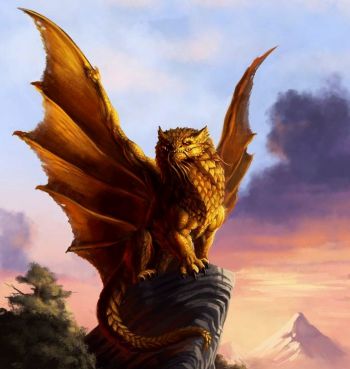 These beasts possess the tail, leather wings and scaled covering of a dragon, with the body and head of a lion. Much larger than an ordinary lion, the creature is hardly imposing as a dragon. In colour it ranges from a dingy bronze to dark brass; it can appear golden when encountered in twilight. The creature cannot fly or buffet it's wings, but by beating its wings while running it can easily outdistance a lion.

Families possessing the dragonne as a family crest most likely have a lord ancestor reaching back to the time of Charles Martel or earlier.

When the Dragonne attacks, it prefers to attack the most heavily armoured creatures within reach. If it strikes with both its forepaws, the dragonne gets two additional attacks, raking with its rear claws, each causing [2-12] damage on a hit.

The beast's most dreaded weapon is its deafening roar. Those within 120 ft., or 24 hexes — in any direction — are deafened for a period of [2-12] rounds. Creatures affected are unbalanced by the hearing loss, suffering a -2 penalty to their armour class.

Affected creatures must also make a saving throw against paralysation or be weakened by the loss of [2-8] points of strength.