Ghasts appear much like ghouls. Viewed through the power of detect malevolence, however, they glow weirdly along the seams of the body, as the disease rents it apart ... particularly in the eyes. The chief difference by which a ghast can be recognized is from its stench, an ungodly putrid odour that strikes the perceiver as the rotting of a being's soul. Approaching within 3 hexes of a ghast demands a saving throw vs. poison; a failure causes the character to heave and retch due to nausea. 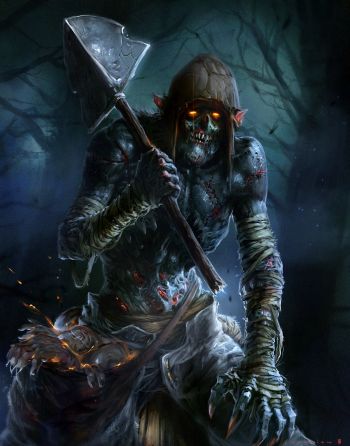 Though carrying the weapon, the ghast is incapable of using it

They are undead creatures arising through unlikely conditions, having to do with deceased persons of especially contemptible nature and the manner of their burial. Those who have practiced malevolence and evil throughout their lives resist death; the soul fails to depart the prime material plane, knowing the fate that waits in their hellish afterlife.

Careful effort must taken when burying such persons. The body must be properly interred in consecrated ground. If these malevolent dead are, instead, buried on ground that's become desecrated, such as a graveyard that's no longer properly tended, or a place used for vile, unholy practices, then the grip of virtue is weak upon the person's soul. Instead of descending to the underworld, he or she will reanimate as a ghast.

One ghast is then free to create other ghasts — for any creature done to death by a ghast will in turn be transformed into a ghast. Thus, the affliction can spread, potentially damning scores of innocent good souls to an unhappy, fiendish existence. Areas filled with ghasts can be difficult to clean out for good, as it seems there's always one that escapes.

Ghasts attack with claws and fangs; a hit with either requires a save vs. paralysation. A fail causes the victim to collapse, dropping any held objects before becoming rigid and helpless for 2-8 rounds. Once the paralysation has passed, it requires one more round for the character to acquire his or her senses before taking any action; during this round, the character's armour class is restored. When paralysed, treat the victim as a helpless defender.

Ghasts are immune to sleep, charm and curses, and are unaffected by protection from malevolence. This makes them a greater threat to paladins and the faithful. Ghasts can be turned as undead by those with Dweomercraft, but they are much too powerful to be turned by clerics who haven't studied this knowledge.