A creature of such hideous appearance that a hapless creature, looking the beast in the eye, may die at the sight. Thus is the fate of those unlucky enough to stumble across this thing. The body resembles that of a huge, bloated buffalo. The head possesses horns on either side of its snout, and it has large, snapping jaws. The creature is as intelligent as canines or felines, so it has some understanding of its malevolent nature. It's been known to act with deliberate malice. 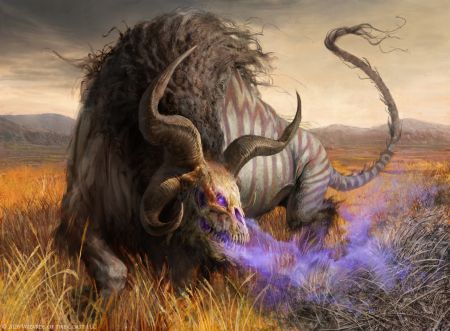 The existence of the creature, including its ability to procreate others of its kind, has long been a source of contention. It is believed that the catoblepas was the result of a beast-making experiment gone wrong; some say that the catoblepas came from the lower planes of existence and that it is really a demon.

The creature's death gaze is terrifying. Any creature approaching within four hexes of the beast is in danger of catching the catoblepas' eye, whereupon a saving throw must be made, or the victim's chest will seize tight with horror. Once this occurs, the individual will quite literally die. However, there is a saving grace: if the characters are well supported by a moderately leveled cleric, the victim can be restored. The death reduces the victim to -11 hit points, so that a death's door spell can effect a recovery.

The catoblepas' tail features a bony club upon its end, fixed with ridges. The tail is structured so that it will snap like a whip when it hits a defender, hitting very hard. If a stun results from this hit, the stun will be profound, lasting two rounds rather than one.

The discovery of these creatures in an area (a knowledge that includes the probability that there are others) brings consternation to many, but rarely will locals undertake the task to destroy it. Outsiders are almost always called for, among those brave and prepared enough to risk the catoblepas' death gaze.