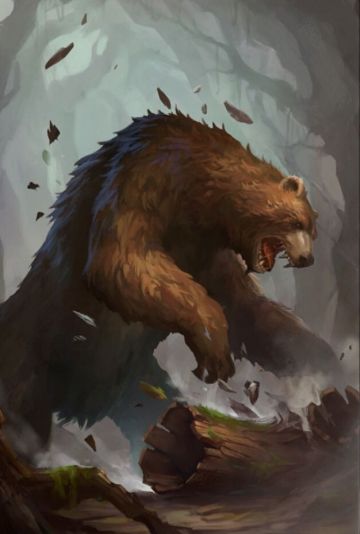 An immense bear preferring to dwell in watery caves with stocks of fish, and other creatures that can serve as prey. The cave bear rarely emerges from its subterranean environment, and then only at night. It is intensively aggressive, being far more likely to view humanoids as prey than would a black or brown bear. Cave bears are entirely carnivorous.

Cave bears hibernate only in subterranean regions that grow cold enough to avoid freezing temperatures during the winter. Many dungeons, of course, are comfortable during the winter months, with deep lakes and river-filled chambers, where cave bears may feed on a wide variety of water-dwelling and wandering monsters.

Most often, cave bears will hunt by wandering. When fighting, once a cave bear has been wounded, it will fight to the death and pursue those who brought it harm. During hibernation, they will sleep for 2-3 weeks at a time, intermittently through the colder half of the year. Hibernating usually follows a good feast.

Occasionally, a cave bear will go mad with bloodlust, often due to disease or contamination. A disease will sometimes affect a mated pair. In such cases, cave bears may even attack a large humanoid lair, fighting and killing until dead. In such cases, a cave bear can do a lot of damage. When rampaging, they will attack with +2 to hit and +3 damage will all its attacks.