The cougar has many names, including puma, mountain lion and panther. It is native to the Americas. It is an ambush predator that stalks hoofed animals, particularly deer. It prefers habitats with dense underbrush and rocky areas for stalking, but it can also live in the open. It is a solitary animal, with the male and female separating after mating, the raising of cubs being left to the female. 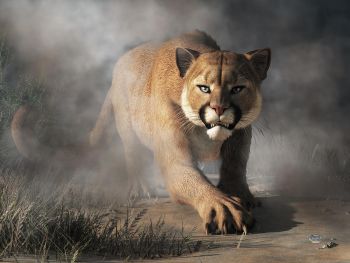 The cougar is slender and agile, with powerful forequarters, neck and jaw. It cannot roar and is known for its silence. The coat is typically tawney like that of a lion, but otherwise ranges from silvery-grey to reddish. They are capable of leaping from the round upwards 18 ft. high into a tree. It is faster than most cats and at the end of its rush it will leap four combat hexes following its movement, enabling it to close the distance quickly with its prey, even when moving warily.

They will attack with their claws and fangs. If the cougar strikes with both forepaws, it will then get two additional attacks, raking with the rear claws, each causing 2-8 damage. It is very observant in its habitat and cannot be easily startled. It is therefore only surprised on a 1 in 6.