Trolls are a species of mutant humanoid with uncertain origins, one that has puzzled scholars for millennia. While often confused with giants, ogres or corrupted demi-beings, trolls have no biological link to any of these. Because of the troll's nature, post-mortem examinations of the monster are extremely difficult, requiring complex methods involving magical stasis and unnatural tools. Because of this, troll studies have lagged far behind. 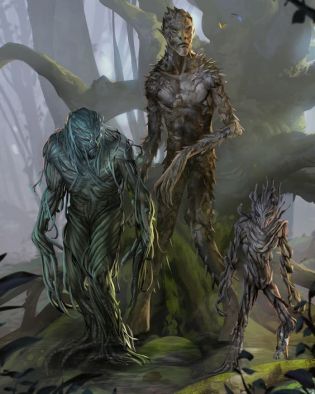 The noted theoretical magician Albertus Magnus of the 13th century posited that these creatures were hylomorphic in construction, compounded of human-like material and wooden matter. He believed that the presence of trolls in virtually every part of the old world confirmed that their origin most likely dates from the Hyborian Age, predating the last ice age, a time period starting about 30,000 years ago. The troll's physical properties are related to some unnatural magical precipitate within the troll's fibrous tissue. It's believed that trolls live as long as six to seven thousand years. It's not known if trolls breed; it's been suggested that trolls occur through abiogenesis.

The myth telling that trolls "turn to stone" when confronted by the sun seems to have arised from the last century's wide-scale efforts to eradicate trolls from civilized Europe. The description is metaphorical, in that trolls caught outside during the day would become rooted "like stone", so as not to be discovered by patrols. There remains plenty of evidence to show that trolls can be destructive during daylight hours and that it is not safe to travel in troll-controlled lands during the day.

Despite their size, trolls are emaciated creatures, with little flesh on their branch-like bones. In build, they are approximately half as robust as a human. There are numerous forms and species. They stand on the balls of their feet, and are lithe and quick when they attack (wary stride = 1.5). Their hide is wooden and tough, and is coloured with brown and black knots and occasionally living green moss. There is a discernable grain in its "flesh." An oily substance suppurates from knobs on the troll's upper chest and throat. A thin, straggling patch of vine-like plants drapes from the troll's head, giving the impression of hair. Once trolls age to four or five hundred years, this growth turns silvery grey.

Trolls have infravision and are often heard moving about at night. Their brawn is formidable, for they possess a strength of 18/60, with bonuses of +2/+3 to hit and damage. Trolls have been known to use clubs, causing 2-7 damage, or 5-10 with strength bonus, in place of a claw attack. If so, they will still have three attacks per round (claw, weapon & bite).

Most dangerous, however, is the creature's ability to regenerate. This restores 3 hit points that the creature has lost, per round. requiring no effort or rest. To render a troll unresistant, the creature must be reduced to less than -4 hit points. Even then, the troll is not "dead." It will revive once regeneration restores it to -3 hit points or more. By hacking at the creature, it's nominal hit points can be reduced to no less than -10 points with weapons; whereupon it will regain consciousness in but three rounds. Still, this gives time to strike the troll with flasks of oil or reduce it with acid, either of which will reduce the troll's hit points to as much as -100. Even then, slowly, the creature's regeneration will eventually restore it to life.

The only sure way to permanently kill a troll is to immerse it in acid, or to place it within a sustained fire that will burn continuously for at least one hour. It is recommended that this be a large bonfire; some have said that an arm or leg, untouched by the flame, can come alive spontaneously and attack. Once an hour has passed, if the troll is not eaten entirely away or reduced completely to ash (a 10% chance), the fire must be rebuilt and sustained for another 20-30 minutes, until it is finally safe. A troll burns like a dense, damp wood, producing much smoke.

If a troll is attacked with an axe, any wound that is caused will cleave a limb from the body. The wound will quickly seal up, causing no damage, while the limb will seek to escape, where it will eventually grow into a full-fledged troll. This limb can move fairly fast, 3 hexes per round. It must be caught, contained and then disposed of, as described above. Using a sword of sharpness or vorpal blade will produce similar results.

For reasons that are unclear, multiple trolls will not arise from the body parts of one troll. Rather, the essence of the original troll seems able to transfer from part to part. If one part escapes, the troll's soul will find it; but it will not abandon it's main body until there is no chance this body will survive. The soul is alive within the troll, until every part of the troll is destroyed. There are some who argue that even then, the soul will "find a way." Perhaps, they say, this is how abiogenesis in some random part of the world occurs.