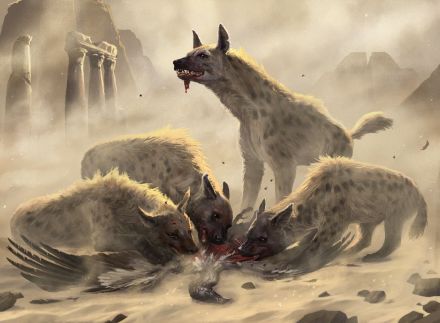 Similar to both canines and felines in body shape and habits, hyenas are aggressive carnivores and scavengers. They prefer to attack first with their teeth rather than their claws in bringing down prey. In folklore, they are viewed as frightening and worthy of contempt. Villagers will often leave food (especially bones) out for hyenas, to reduce the chance of them forcing their way into homes to get food. Some hyenas have been known to prey only on humans. They will attack the sleeping and sick at night if able.

There is a belief in some parts of Africa that witches will use large hyenas as mounts. Some myths account for were-hyenas, who are cannibalistic of humans in nature; and even that some hyenas are vampiric in nature, attacking people in the night and sucking the blook from their necks. These beliefs have not been substantiated.

Primarily a scavenger, the hyena will, if driven to it by hunger, act as a pack to bring down a large-sized mammal. These are caught by wearing them down in long chases and then dismembering them in a canid-like manner.

The vocalisation of the hyena resembling hysterical human laughter is well known among those who have heard the sound.

A hyena's den is a network of underground tunnels, recognizable from the strewn bones and feces that may lie at its edge. Their territory is marked out with "hyena butter", a malodorous gooey substance with the scent of boiling soap. The substance is said to be used by hyena-riding shamans and witches for torch fuel, as well as for traditional African medicines.

Due to their keen sense of hearing, these creatures are surprised only on a 1 in 6. 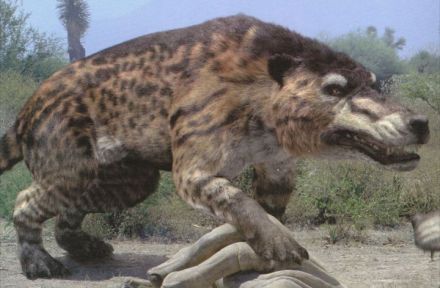 Also known as the cave hyena, this creature is found broadly throughout central and northern Asia, as well as southern Africa. Though seen in Europe many ages past, it is extremely rare for one of these creatures to appear west of the Black Sea. It is semi-friendly to several humanoid races, notably bugbears, haruchai, hobgoblins and ogres. Towards most other races, however, these beasts are extremely feral and apt to attack without much provocation.

They share many of the same characteristics as their smaller kin, including being surprised only on a 1 in 6. The jaws of the hyenadon are unnaturally strong; upon a natural 20 (critical hit), these creatures cause triple damage, not double.

While the fur of the typical hyena is course and matted, parts of the larger hyena's coat is somewhat more valuable: the value would be equal to that of a common bearskin.