Gargoyles are magical stone monsters with distorted, often hideous faces and traditionally gothic features. These creatures may or may not have wings — though most do. They are found in ruins and caves; some are also known to attach themselves to cathedrals as statues. They are very rarely found outside of Europe. Gargoyles are highly resistant to weapons and are enormously massive, being made of animated stone (the qualities of which are softer than stone but much, much harder than flesh). 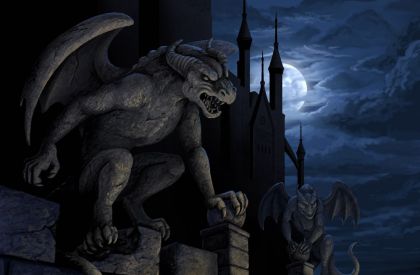 Their form can vary considerably, depending upon the sculptor, but draconic, serpentine, lion-like and bat-like features are the most common. The creatures cannot reproduce and are subject to the same effects that would erode, break or shatter rocks. Except for their possible destruction, the length of a gargoyle's lifetime is unknown; they might conceivably survive for ten or twenty thousand years.

Gargoyles were created by magical experimentation during the development of the Abbey at Cluny, sometime in the 11th century. The method for sculpting gargoyles became widespread over the next 300 years. During the Papal Schism of 1378 to 1417, gargoyles fought for both sides, producing the consequence that many gargoyles — hardly intelligent to begin with — became self-aware and began to fight for themselves. The Council of Constance banned gargoyles in 1417 ... and since that time there have been efforts to exterminate the creatures. However, gargoyles are not especially malevolent or aggressive — but they have been easily used by malevolent forces, the consequences of which have soured empathy for these creatures.

Because they are hunted, they will often hide in plain sight among ordinary, inanimate statuary, which they resemble. A gargoyle can remain absolutely still for as long as decades, so that an entire generation may presume that a gargoyle they've observed since childhood is nothing more than a statue. Often, town fathers or church leaders will deliberately overlook the appearance of a gargoyle, adopting and protecting the creature rather than betraying its presence to gargoyle hunters.

Packs of gargoyles are sometimes organized by highly intelligent creatures who have made the effort to gather these creatures together. They are highly susceptible to obeying a powerful, intelligent master.

Gargoyles are only hit by +1 magical weapons or better. Their tremendous weight grants them amany hit points, though they have only 4 hit dice. Most gargoyles are able to fly through magic, but these creatures aren't especially agile in the air.