The leopard dwells in a wide range of varying climates, from sub-arctic to the tropics. The most notable species are the snow leopard, or Amur leopard, the Javan, the black panther, the Arabian leopard and the more commonly known African leopard. Each possesses fur that's soft to the touch, in colours from nearly white to yellowish and dark golden; all have dark spots that form rosettes. The leopard's fur grows longer in northern climates. The animal is able to hide well, so that it surprises its prey easily. 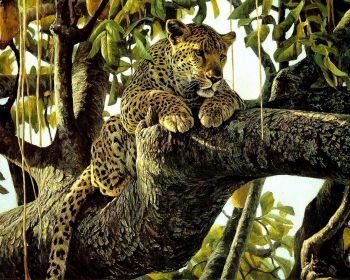 The male is about 40% larger than the female; both have the same number of hit dice. Leopards have short legs and a long body, with a large skull. They are solitary animals; the male and female separate after mating, with the latter tending to raising the cubs. If a leopard is caught as a cub and properly raised, a resultant adult will be tame; leopards are often kept as pets.

Leopards can climb trees very skillfully, often resting on tree branches and jumping downwards onto its front feet. Leopards attack after rushing forward at considerable speed, leaping four combat hexes in addition to its movement; enabling it to close the distance quickly with its prey. The leopard can perform this leap between trees, which they sometimes do in order to then drop down on prey, surprising them.

The leopard attacks with their claws and fangs. If the leopard strikes with both claws, it gets two additional raking hits with the rear claws, reflexively causing 1-6 damage each.

The leopard is very observant in its habitat and can be surprised only on a 1 in 6.