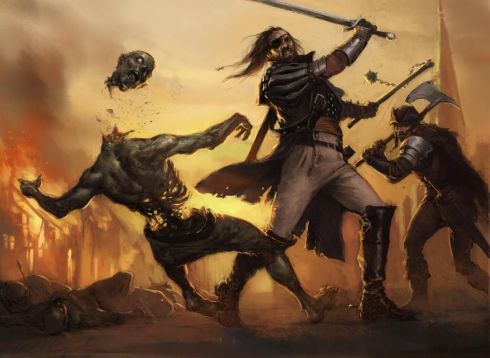 When rolling a d20 to hit, natural results of "1," "2" and "20" will cause fumbles, friendly fire and critical hits. The effects of these are collected below.

In this procedure, if a natural "19" is rolled following a natural 20, and the target is not wearing a helmet or other head covering, then the damage is increased as though another natural 20 is rolled, but the d20 is not rolled again. The combatant rolls damage, adjusts it normally for strength bonuses, magic and other modifiers, and then multiplies this damage by 2, 3 or more, as indicated.

For example, Erdowan swings with a long sword at a hippogriff and rolls a natural 20. He picks up the d20 again and rolls, obtaining a 19. As the hippogriff has no special protective head covering, Erdowan's hit causes triple damage on his sword. He does not reroll the d20. Erdowan rolls a 4 on a d8 for damage. He has a 16 strength and a +1 long sword, so he adds these to his total (6 damage), which he triples for a total of 18 damage. From this damage, the hippogriff suffers a wound and an injury point.

Exception: for a hit to be considered potentially critical, the natural 20 must have a modified result that is at least 2 points higher than the character needs to hit the target. For example, Faye is a 1st level cleric who needs a modified 20 to hit Gareth, who has an armour class (AC) of 0. Faye has no modifiers to hit, so that when she hits AC 0, it fails to meet the criteria of a critical hit. Faye therefore causes normal damage.

When an attacker is firing or hurling a weapon, and there is a friendly ally that is within an arc of fire of 30° to the right or left of the target, then on a natural 2, then a friendly fire hit is applied to the attacker's ally. This hit is automatic and is not affect by the ally's armour class. The attacker rolls damage and this is applied to the ally, who is subject to normal results accruing from hits.

Awarded experience is unchanged for the attacker or the target, despite the relationship between the two.

Exception: bonuses gained from chant, prayer or martial spirit is not applied to friendly fire damage.

Though not technically "fire," when using weapons that require a lot of space, specifically limited to mauls, flails, morning stars, pole arms, quarterstaves, spears, two-handed swords and tridents, then combatants are able to cause friendly hits to allies in adjacent hexes when a natural 2 is rolled. If more than one ally may be potentially hit, then a random roll is made to determine which one.

Friendly hits may be suspended if the character possesses the disciplined swing sage ability. 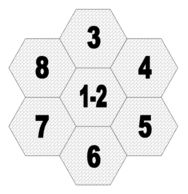 On rolling a natural 1, the combatant has performed a fumble. This will mean that the combatant has dropped their weapon. Where the weapon falls must be determined. The combatant rolls a d8 and addresses the table shown. A roll of 1-2 indicates that the weapon has fallen at the feet of the owner and can therefore be scooped up again the following round (provided that the owner is then not driven off that hex by an opponent's attack). Rolls of 3 to 8 will indicate that the weapon has landed in a hex adjacent to the owner's hex: left, right or above, as shown on the right-hand figure. 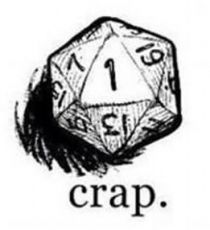 If the hex indicated is occupied by a solid object (a building or stone wall, for example), then the weapon is presumed to have rebounded into the owner's hex. If the hex indicated is an empty space, such as a well, the edge of a cliff, a pool of water, a river or such like, then the weapon will fall and perhaps be difficult or even impossible to retrieve. In such cases, the DM must judge how to best handle retrieval attempts.

Thrown weapons that land or bounce against hard surfaces must also roll to see if they break. If a thrown weapon indicates a successful hit, a break check is not made and the weapon is presumed to be unbroken.

If the drop occurs on a metal, stone or tiled surface, or in an urban environment where the weapon may have come into contact with a nearby pillar or wall, then the combatant must roll to determine if the weapon breaks. The chance of a weapon breaking is obtained from the weapons list page. A "1" on the appropriate die indicates that the weapon has broken and is therefore useless. Weapons that fall on dirt, wood or other soft surfaces need not roll to see if they break.

If the weapon is magical, then two dice of the type indicated for the weapon are both rolled, and both must turn up as 1s in order for the magical weapon to break. For example, if an ordinary short sword is dropped, the combatant rolls a d6 and on a 1, the weapon will break (1 in 6). If the short sword is magical in nature, the character rolls 2d6, and will need to roll snake eyes for a negative effect to result. If the magical sword has a bonus of +1, then the sword will break and the magic will be permanently lost. However, if the magical sword has a bonus of +2, the sword does not break — but it is downgraded in power to +1. If the magical sword were normally +1, +4 vs. reptiles, then the sword would lose 1 point to both forms of attack, so that it would remain a magical sword (without a bonus) to most enemies, and would have a +3 bonus against reptiles.