Lacedon are undead ghouls that originate as humanoids that are malevolently cast into the sea and left to drown, either by murderers wishing to dispose of a rival or during times of war, when many sailor and marines fall overboard and are lost during boarding fights. Occasionally, a body presumed dead upon disposal, but in fact alive, will manifest as a ghoul. The practice of gaining the confession of a condemned prisoner forced to walk the plank, and blessing him prior to an execution, is intended to keep the body from rising as a lacedon. 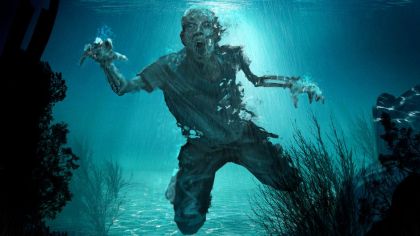 Once immersed, the lacedon's skin swells as it putrefies, developing abrasions as it rolls back and forth upon the sea bottom with the currents. The skin develops a mottled green-and-grey effect; as the body fills with gas, rather that it being dragged to the surface, the undead-nature of the creature splits open along the spine, releasing this excess gas so that it can remain underwater. The overall effect is quite hideous.

They bear an intense resentment for intelligent creatures surface dwellers but will not actively seek out humanoid races that dwell beneath the sea. However, mermen, sahuagin and tritons will actively seek out these creatures and destroy them, if a nest becomes known. Most other intelligent races will leave them be, even leading outsiders into known lacedon-infested regions, letting these undead dispatch their enemies.

Lacedon have natural immunities to sleep and charm, and cannot be affected by magic of this kind, including suggestion and forms of emotional manipulation.

They attack with claws that develop about a month after death, and with fangs that grow soon after. If found before the development of these physical attributes, there is still time to give the body a proper burial. Afterwards, the touch of the lacedon will cause paralysation, which must be saved against each time an individual is attacked. To force this save, the lacedon must hit the defender's armour class. A failed save will cause the victim to be paralysed for 2-8 rounds; during this time, the victim cannot breathe, but the effect of the paralysis will protect against death by drowning. The lacedon wants its victim to still be alive, so that it can be transformed.

Lacedons are able infect victims with the disease of Vathektic Tremens, often called the "ghoul's disease." Once a victim has suffered enough damage to fall into the negatives, there is an increasing chance (10% per hit point below zero) of contracting the disease.

If this should occur, then healing of any kind will fail to have any influence on the victim, who will then lose one hit point every hour until death occurs. The only possible means of counteracting the disease is through exorcism or casting out, the latter a sage ability related to dweomercraft. When infected by the disease in this fashion, the victim does not require a month to grow claws and fangs; both will form spontaneously within one hour after death. It is believed that the slow acquisition of corpses abandoned at sea occurs because in such spontaneous cases, the disease accumulates slowly over time, unlike those directly infected.