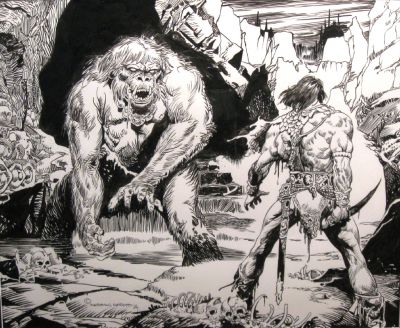 A highly aggressive, huge gorilla, deliberately altered by the addition of ettin-blood and other gestative practices in order to breed a carnivorous variety. The ape is sterile and occurs only in the male form. The lifespan of the creature is more than 40 years, so though difficult to reproduce there are many of these creatures roaming about, unexpectedly in Asian rainforests. As the ape is possessed of some intelligence, it can be encouraged to become fiercely loyal to a tribal shaman or brahmin of sufficient wisdom or intelligence, thus becoming a vicious protective animal for a given village. Settlements have been known to have as many as 1–4 of these creatures, serving as trained watchdogs.

In the wild, they are almost always encountered as isolated carnivores, preying on whatever they can find. They are cannibalistic in regards to other apes. They will roam any landscape where large animals appear in number, preferring jungles and savanna woodlands.

Carnivorous apes walk on their hind legs but run on their feet and hands. Their reach is formidable, providing a superior armour class. These apes have been known to employ heavy animal bones as weapons — treat as a club causing 1-10 damage. Use of this weapon replaces one of the claw attacks; the ape has an 18/51 strength, so it will be +2 to hit and cause +3 damage.

Half the time, however, they will not be armed; in such cases, they will always focus their three attacks on a single defender. If they hit with both their hands, this will indicate that they've taken hold of the defender. The ape's arms will then crush the defender against its chest, causing an additional 4–10 damage of mauling damage. If the defender is knocked unconscious, the ape will seize the victim and toss him or her two hexes away. This will cause 1-4 more damage. If the defender is still conscious, and is not stunned, they may attempt a strength check to break free, at -4 on the die roll. If this attempt fails, the ape will maul again for an additional 4–16 damage the following round. It will also attack with a bite and then toss the defender to the side.

If met with more than five defenders, the ape will run, seeking a large, high tree or cliff face to climb. Carnivorous apes will never be encountered more than 30 hexes from such a tree, and are probably (70%) within 4-10 hexes of such a tree. They do not like to move in open country, except at night.

Carnivorous apes are surprised only on a 1 in 6.