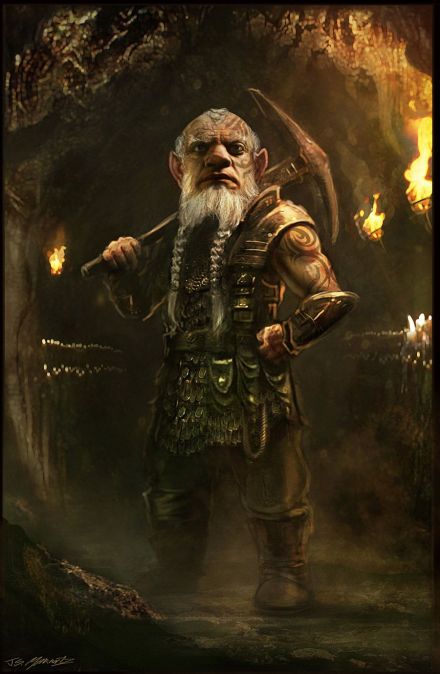 Originating from the much more ancient svirfneblin, a race of subterranean creatures dwelling in Scandinavia, the gnomes are a cooperative, industrious race. During the late Bronze and Iron Ages, the gnomes were the dominant race of much of northern Europe. Their empire, the Vepsian, declined due to the gnomes’ lack of aggression and interest in war craft, giving way to occupation by the elves, humans and gnolls before Rome became an empire.

Today, there are five gnomish kingdoms: Lenglin, Nanbrun, Vepses, Vastenjaur and Harnia. Of these, Harnia is the most powerful. All are scattered remnants of the old empire, but at present they have little interaction between one another beyond an honorary visit. Each depends upon its neighbours for trade and protection — and none have anything but friendly relations with their neighbours, as it is unlike gnomes to be either ambitious or reticent in their generosity.

Small compared with most other races, with an average height between 3 ft. and 3 ft. 6 in., and anywhere between 55 and 105 lbs. Gnomes are slight in appearance, with none of the paunch associated with halflings or dwarves. They possess somewhat pointed ears and high cheekbones, and often grow beards for warmth. They hair turns grey early in life, usually in the mid-40s.

The gnome’s fine hair may vary from grey to brown, black, bronze or flaming red in colour. Eye colour may be brown, black, grey, hazel or even jade green. Silver grey, ultramarine and violet occur very rarely, and only among gnomes of the highest charisma. Their skin colour is tawny brown.

Player characters choosing this race gain a +1 constitution and a -1 strength.

Gnomes are skilled assassins, clerics, fighters, illusionists and thieves. They are highly magic resistant and tough, even more so than dwarves, gaining a bonus of +1 to saving throws against paralysation, polymorph, magic and magic items and breath weapons for every 3 points of constitution. A gnome with a 16 constitution would have a +5 saving throw against these attacks.

Gnomes are well trained against old enemies of their people, receiving a +1 to hit when in battle with bugbears, gnolls, goblins, hobgoblins and norkers. Gnomes also improve their armour class by four points when confronting bugbears, ettin, gnolls, ogres, ogre magi, trolls and giants of every kind.

Gnomes also possess infravision, being able to see in the dark with relative clarity. This comes from their ancestors, who dwelt below ground, and from a hundred generations of gnomes who have dwelt in the dark coniferous forests of northern Europe.

A great many gnomes living amongst their own kind possess skills in foraging, hunting, metallurgy and prospecting, these abilities having much influence on gnomish life.