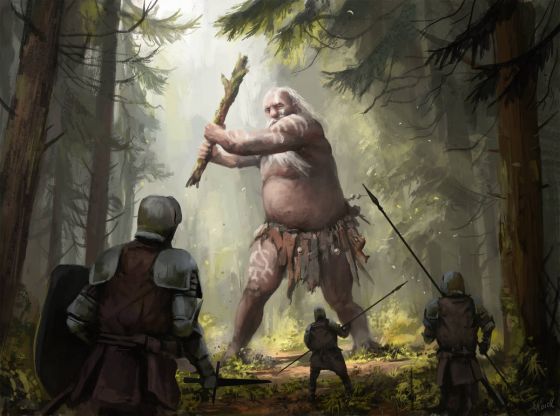 Giants are beings of human-like appearance that are prodigious in size and strength. Giants are very strong, with strengths ranging from 18/00 to 24. Likewise, in combat, they use enormous weapons that cause vastly more damage than ordinary sized swords, axes or clubs. The combination of size and strength makes any giant a formidable enemy.

While some are stupid and known to be aggressive, other giants are known to be civilised, friendly and even generous. Their number includes ogres, ettin and cyclops, but not titans, who are demi-gods and not giants. Others include cloud, fire, frost, hill, mountain, stone and storm giants. Mist Giants are a form of vaporous quasi-elemental and are not actually giants.

Giants have taken part in numerous wars, particularly in ancient times when their numbers were greater. They flourished especially in Chalcolithic times; many modern giant legends tell tales of wars between giants and dragons, though there remains little enmity between these creatures today. Giants aided in constructing the Tower of Babel and Stonehenge, were instrumental in the spread of Norse mythology and were known for rescuing ships at sea and aiding in the movement of Celtic peoples throughout northern Europe. The Amorites were said to have numerous giants in their number. There remains some dispute as to whether there were giants who fought at the siege of Troy, but many historic battles featured giants. It's believed that Goliath, slewed by David, was an ogre. Though there are myths that say otherwise, giants are not known for eating smaller humanoids.