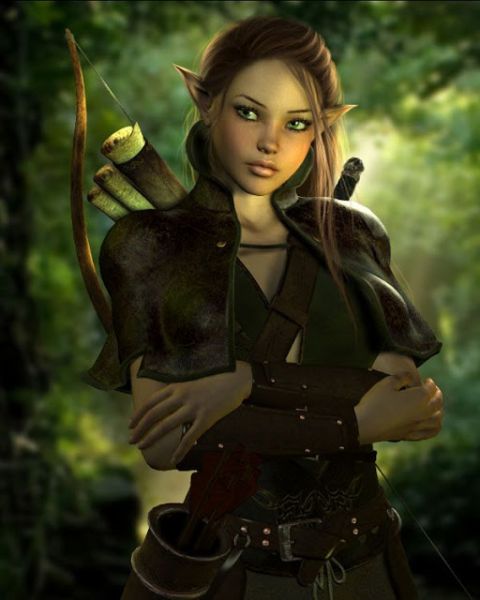 The oldest dominant humanoid species on Earth apart from human beings. The origin of elves remains to this day outside of common knowledge; even to elven cultures the facts remain a mystery. It is believed that elves arrived "from the west," but since this same legend is described by elves in Europe, the New World and Asia, it cannot be said precisely where this "west" begins. Most likely, the ambiguous term is used to describe another plane of existence, from which elves arrived into the Prime Material some 50,000 years ago.

The most familiarly known elvish culture is that of Ulthua, situated between Scandinavia and Bjarmaland on the coasts of the Barents and White seas. Once a military-based empire some 2,000 years ago, for more than five centuries these elvish peoples have adopted a philosophy of peace with their neighbours. There has been no notable conflict between elves and outsiders since the Swedish third crusade of 1293-1295.

Colonies of the Americas have described encounters with a less organized and civilized race of elves, commonly called "wood elves," dwelling among the Appalachian cordillera and valleys beyond. Though plainly elves in appearance, these are shorter, with pale grey eyes and more hunter-green in colour. While civilized and skilled, the wood elves of America are far less culturally advanced that the winter elves of Europe.

A third group, more obscure, is known to occupy the coasts of the Bering Sea north of Kamchatka. Only a little is known about these "Anduin" elves. Because they dwell in arctic lands like the Ulthuans, it is believed that these make up a primitive winter elven culture — and are perhaps the "west" from where both wood elves and those of Ulthua originated.

Players are able to choose the elven race as an option for their characters, the choice being an elf of the winter elven background. Players cannot choose a wood elf as a character option. Some advantages described below apply to all elves, but players do not receive any sage abilities from this race that are described below.

Elves average five feet in height, with slender, lean bodies. Most males will weigh about 100 lbs., but rare males will be as tall as five foot eight or nine and weigh as much as 180 lbs. Female elves average 80 lbs. The elf’s fine hair may vary from ginger and black, to wheaten blonde, silver grey and platinum blonde. Their eye colour is usually a wide range of the colour blue, but the most charismatic may have eyes that are ultramarine and even violet in colour. Their skin colour is pale nordic.

Player characters choosing this race gain a +1 dexterity and a -1 constitution.

Elves are skilled assassins, clerics, fighters, mages, rangers and thieves. Their presence of mind permits a +1 saving throw against charm spells for every 3½ points of intelligence. An elf with an intelligence of 15 would have a +4 saving throw.

Elves also possess infravision, being able to see in the dark with relative clarity. Because of their experience moving through the outdoors, non-player character elves possess the stealth ability. Contrary to popular belief, elves do not possess any special abilities locate secret and concealed doors.