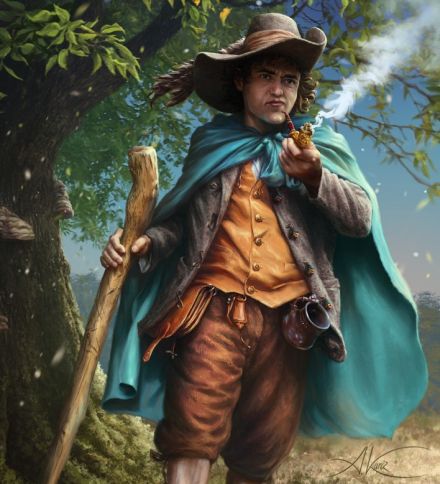 Spontaneously descended from human peoples in pre-Celtic Britain as many as 14,000 years ago, when Britain was still part of mainland Europe, the halflings scattered in small tribal groups throughout the west coastlands facing the Atlantic Ocean. Over the next three millennia, with the development of agricultural techniques, these people shifted and migrated progressively eastward following rivers into what became known as Doggerland. However, the halfling culture that formed there in what is now the North Sea was flooded between 6500 and 6200 BCE.

Halfling peoples continued to move east, making alliances with the gnomes of Scandinavia and acting as friends. Today, halfling settlements — notably Dalshire overlooking Skagerrak, Oxshire overlooking the Gulf of Bothnia, Breen on the Greenland Sea and the Archangel on the White Sea. Each of these lands are pleasant and peaceful, if somewhat out of the way.

Half as tall as a human, halfling have an average height between 2 ft. 8 in. and 3 ft. tall. Not as stocky as dwarves, they still tend to be stout, with delicate ears. They do not grow but a wisp of beard, and almost wholly on their cheeks, but their lower legs and feet are considerably more hairy than that of a human. Their feet are unusually leathery, so that they are comfortable walking along a roadway or in fields in their bare feet — but this is not thick enough for adventuring in a true wilderness.

They have thick hair that ranges from ginger and russet brown, to jet black, wheaten and flat white — even platinum blonde. A white colour is considered more attractive among their people, where as ginger and brown are most common. Eye colour is various shades of brown, with cases of chartreuse green and silver grey occurring. Skin colours are bronze or honey coloured browns, with a very slight tinge of yellow.

Player characters choosing this race gain a +1 dexterity and a -1 strength.

Halflings are limited to only three classes, druid, fighter or thief. Their height greatly limits their choice of weapons, so that most of their race prefer short swords, daggers, slings and spears. They are very effective with a sling, receiving a +3 to hit with this weapon.

Halflings also possess infravision, being able to see in the dark with relative clarity.