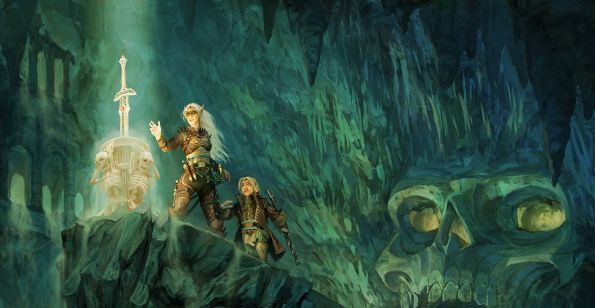 A magic item is any object with magical powers that can be used to affect the game's setting. Items may be weapons, armour and other tools that permit the overcoming of obstacles or the creation of things; they may allow the control of other creatures through charm and other forms of mastery; they may heal or bring back the dead; they may protect the player from harm; they may allow unnatural forms of travel; they may, in fact, produce effects of any kind that can be conceived of within the campaign.

While prevalent within the game, the power of magic items also makes them dangerous to the game's playability. Forethought and consideration are needed in providing these items to players, since an unbridled accumulation of magic items also means the acquisition of power on a scale that "breaks" the game itself. Therefore, when dispensing these items, the DM must practice moderation. Moreover, magic items must not be available for sale; if gotten easily, the relative power of the item should be slight at best. Even moderately powerful items should require considerable effort to obtain, and anything of great power should sincerely challenge the player's resolve. It simply makes no sense for characters to accumulate so many items that they "boast and strut about with scores of mighty magical items, artefacts and relics adorning them like they were Christmas trees decked out with tinsel and ornaments."

There are many falsehoods associated with magical items but there is one that specifically needs refutation: ordinary magic items are designed to be simple for the user and don't require the use of code words or special commands. Some items are made for specific character classes and therefore can only be understood and implemented by that class.

In all, there are ten categories of magic item. Ordinary forms include armour, potions, rings, rods, scrolls, staves, wands, weapons and miscellaneous magic. Each of these types have been reproduced in their hundreds, even their thousands, while with others there are only a few throughout the world. The tenth category of item is the artefact; these are such unusual items that they are wholly unique, because the powerful nature of these items denies the possibility of duplication.

Details and links to descriptions for these items can be found on their individual pages.

Whereas rules in the past have proposed the magical items are created by high level persons throwing thousands of gold pieces at the problem, the system here requires an elaborate collection of skills and knowledge that come together and make the creation of items possible. Usually, this requires multiple persons with various sage abilities who are willing to work together to enable the final product. A complete list of all the possible abilities necessary is not available at this time, since with miscellaneous magic in particular, any one item might require specific skills which, frankly, have not yet be conceived of for the game. Such details can be created if it ever becomes practical for characters to pursue those goals. In the meantime, here is a general list of sage abilities needed to make common items:

Armour and weapons must be made by a character who studies metal armour or weaponwright, using the sage abilities create magic armour or create magic weapon. The mithril or adamantium that's used for this process must be forged by a character who studies metalsmithing, with the expert sage ability, enchant metal. Magical wood must be grown by those who study trees, using the ability, enchant tree.

Potions require the expert-status ability, potion-making, which can be had through alchemy. Potions must then be stored in special ceramic flasks that sustain their useful effects; these flasks are created through the potion bottle ability, related to the study of ceramics modelling.

Rings require enchanted mithril as linked above under armour and weapons, coupled with the sage ability enchant ring, as enabled by those who study delicate metalwork.

Scrolls first require the use of the magic spell, write, as well as the sage ability publish magic scroll, found under the study of publishing. The spell to be placed on the scroll must be made available from someone's spellbook at the time the scroll is published.

Wands originate from a different wooden vessel than do rods and staves; the wood for a wand must be fabricated from a growth of mistletoe, enabled by a character who studies flowers & sprigs and has the warp mistletoe ability. This utensil can then be invested with its power with the ability described under rods and staves.

In addition to these abilities, the character wishing to make the item must also have some additional way of possessing the power required, so that it must be locked into the magical vessel being created. For example, a ring of protection +1 would require the temporary draining of life energy from an individual with a minimum 16 dexterity. More and more powerful effects would require the previous existence of spells, the sacrifice of body parts or the whole life essence of a victim, channelled energy from perhaps other planes of existence and so on. In time, the manner in which this necessity can be overcome, for each magic item, will be detailed on an individual page.