When player characters are generated, it is necessary to establish the character's age. I usually do this with my character background generator, but in case I have to do it manually, and so that players understand the formulas for calculating age, I include the table shown on the right. Where "na" appears, it is because that class is "not available" to that character race.

My game doesn't recognize the extended lifespans given to non-human characters in AD&D, so my character races are adjusted to fit the traditional human lifespan. This translates to some characters being unusually old (dwarf and gnome clerics) or atypically young (elven assassins and thieves). My feeling is the disparity reflects some races resistance against training individuals until they've reached a certain age — or that youth indicates how much faster some races master a character class compared to others.

Multi-classed characters begin with the highest base number of all classes possessed; the total modifiers for all classes is added. For example, a half-elven fighter/mage would have a base age of "23," adding "2d6 + 1d4" to that base. This makes the multi-classed half-elven's age an average of 32-33.

Non-player characters of a character class will generally be older; we assume they have been out and about in the world for sometime, while the numbers shown indicate the player character at approximately the moment they have been released from their training. A general guideline of 1d4 years can be added per level of the NPC to indicate the amount of time spent in gaining levels, so that a 5th level NPC human mage would ordinarily be 24+2d8, +4d4 (four levels gained past 1st), for an average age of 43 years. As a guideline this can be ignored in special cases, because it can certainly take less than four years to gain four levels if the NPC has spent that time adventuring, while at the same time there's nothing to say that a 5th level mage cannot be 70+ years old.

For example, the player rolls up a 1st level dwarven fighter that is 20 years old. This makes the character a "young adult." Using the New Character column, the fighter's wisdom is reduced by 1 point, while the fighter's constitution is increased by 1. As the campaign continues, the dwarven fighter advances to age 21, or "mature." Using the Grown Older column, the point of wisdom is restored and the character gains 1 point of strength. Once the character aged to being 41, the adjustments made for being middle aged would be applied to the character's stats.

Death Due to Age 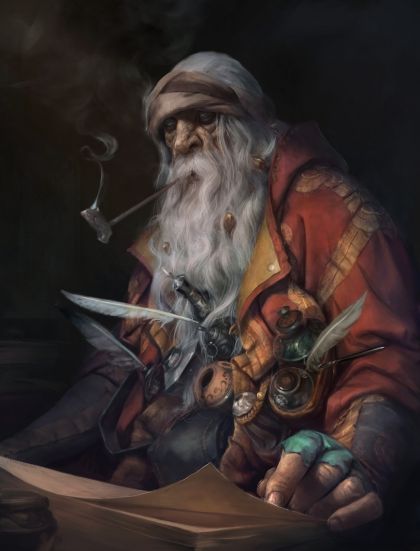 As player characters are presumed to be exceptional, for game purposes a PC cannot die from natural causes (except by a contracted disease) until they reach the age of 61. Once a character reaches that age, a roll is made to determine how long it will be before a "Fate Check" needs to be made, starting with the top line of the chart shown. A note is made that this roll of 5d12, or 5-60, has been made. This will indicate the number of months that will pass, added to the character’s 61st birthday. Once the month of the check is calculated, a d30 is added to that date for the specific day; on that day, the DM can either decide on a random hour for rolling the required fate check, or a roll to see if the character passes away in his or her sleep.

When the day arrives, the success of the fate check is calculated by adding the character’s present constitution to 80. This produces a two-digit number that is the percentage that must be rolled by John in order to survive.

If John’s constitution is 14, then his fate survival chance is 94%. If John rolls above that, then John is dead of old age.

A character that has died of old age may be restored by raise dead — however, a note should be made that the next progressive check is skipped, and the one below that is used.

In the example given above, if John dies on the 25th of July, 1653, and is raised, his next roll would not be 5d10, but 4d12, the 3rd line shown on the chart. Each time a character dies of old age and is either raised or resurrected, a line on the Fate Check Table is skipped.