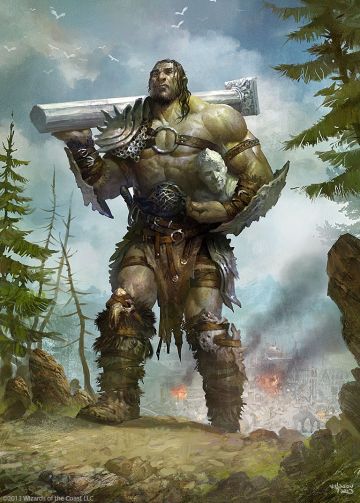 An ability stat, strength describes the physical capacity of the character to bring force to bear, whether this means carrying weight, striking harder with weapons, lifting or breaking objects with one's bare hands and so on. Strength is a required prerequisite of fighters, paladins, rangers, assassins and monks.

Strength most commonly adjusts encumbrance and the player's success in combat. The to hit bonus (or modifier) may add or subtracts points from the d20 when the character attempts to hit with a weapon. If the hit occurs, then the amount of damage done by a weapon is adjusted by the damage bonus.

For example, a 1st level character with a 4 strength swings with a dagger. Rolling a d20, they get a result of 16, which would normally hit armour class 4. However, due to the character's low strength, the die is adjusted to a 14. If this hits, the character then rolls a d4 for the dagger's damage. If the character gets a result of a 1, then 1 is subtracted from this total and the character does no damage at all. Bonuses that add to the die work the same way.

Characters and creatures who are determined upon creation to have a "natural" 18 strength (without adjustments) are entitled to roll a percentile die to determine their exceptional strength (or, "percentile" strength). This roll, from 1 to 100, can add tremendous power to the character's combat force.

If a character with a 17 strength has their strength augmented by 1 point, through age, spell or other means, their new strength is rated as 18, without a following percentage. If this 18 strength is then augmented by another point, then 1% is added and the new strength becomes 18/01. Otherwise, all point changes to exceptional strength, whether up or down, are adjusted by amounts of 10% - except that an augmented 18/91 to 18/99 strength would then become an 18/00 strength. This would then fall to 18/90 if a point of strength was lost. If an 18/00 strength is augmented, it becomes a 19 strength, then proceeds upwards by one point at a time until a maximum of 25 strength is reached.

The 2nd level mage spell, strength, has the power to increase the ability stat by 1-8 points. If it were used upon a character with an 18/64 strength, boosting this by 6 points, three of those points would boost it to 18/94, then a point would make it 18/00, then finally 2 more points would bring the final total to a 20 strength.

A strength of 19 is usually considered to be the highest natural strength that a player character race can obtain (this includes humans, dwarves, elves, gnomes, halflings, half-elves and half-orcs). A character could conceivably obtain a 20 strength, by starting as a half-orc, rolling a natural 18 for strength, rolling a percentage of 100, then adding 1 point for their racial characteristic and a second point for being of mature age. This is highly unlikely - but if it occurs, I would personally allow it.