Goblins are small humanoids with long, sharp ears, leathery greenish skin and an irascible, cringing nature. They possess a rather unpleasant odour to those who are not of the goblinish race, as they have a distaste for washing themselves. Their intelligence is low, which contributes to their unpleasantness. They have but one homeland, a large, sparsely settled kingdom east of the Ural Mountains that they call Magloshkagok that occupies the lower Ob River basin. The region is mostly taiga, muskeg and gravelled tundra, of little value, that became a refuge for goblin slaves who escaped their hobgoblin masters over the centuries. More than two thirds of the world's population of goblins remain slaves inside hobgoblin lands; or else exist in hidden, subterranean clans scattered throughout Eurasia, from China to Iberia. 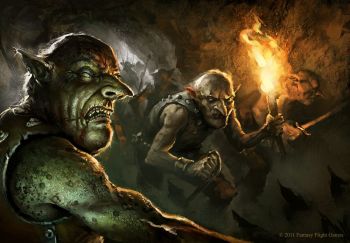 The first goblins were brought into the world through the Kodar Gate as slaves, first as a part of the hobgoblin Fifty Tribes and later by norkers and xvarts. They were encouraged by these races to increase their numbers, and for this reason were settled in hundreds of slave camps, or gulags, across northern and eastern Asia. For a thousand years, there were tales of goblin clans who escaped to the west, following the Ob River, who were swallowed up by the vast wilderness — or else hunted down and destroyed by hobgoblin war parties. The first settlement of these escaped slaves did not succeed until 663 A.D., with the founding of Gashkura upon a western branch of the Ob River, more than a thousand miles from the hobgoblin frontier. For three centuries thereafter, other settlements were founded, until the goblins were able to form the Magloshkagok kingdom around the large centers of Yobat, Boloine Ob and Istin-gach. These places have grown into important trading markets between east and west.

For centuries before and after this period, goblin mercenaries were used throughout the migration period in which Huns, Slavs, Avars and Magyars swept from the east into Europe. During the rise of human cultures resulting from these invasions, the goblins were persecuted and often exiled; in notable cases, such as Thrace (715 A.D.) and Ruthenia (955), attempts were made to eradicate goblin tribes, who had been granted lands, through genocide. These pogroms forced the goblins into the subterranean realm; there, some tribes have not seen the surface in generations, while other clans willingly raid up to hundreds of miles from their lairs, keeping their origin a secret. There is not a part of Europe or Western Asia that cannot count an unknown number of goblin residents among their populations.

Goblins reproduce in broods, where usually more than one goblin is born per pregnancy. The brooding period requires 16 to 18 months. Like other goblinish races, goblins are able to safely reproduce healthy offspring from unions between brother and sister — however, such unions often produce only one or two goblins per brood. For that reason, goblins of different clans are exchanged, allowing broods from five to ten per brood. Infant deaths average about 1 in 4 goblins; the remainder will obtain maturity as combatants in just 5-6 years. If unchecked, a single clan of goblins can vastly increase their number of mature combatants more than five-fold in just a few years — but usually, the food supply requires that only some among the clan are allowed to reproduce, and only once or twice in a lifetime.

Goblins possess infravision and have excellent hearing when in the outdoors (penalty of -1 to stealth). They are well-suited to the extremely cold climate of their homeland. Goblins are able to swim from the day they're born.

Goblins are less hierarchical than other goblinish races, perhaps because their history has discouraged obedience to others, even their own kind. Clans are strongly independent, rarely choosing to gather together as tribes more than once per year. Inhabitants of villages and urban settlements tend towards indifference about their ancestry, seeking self-determination through commerce and artisanship. More traditional clans wander the backcountry and hinterland, hunting and gathering, often acting on their own for two or three years at a stretch. 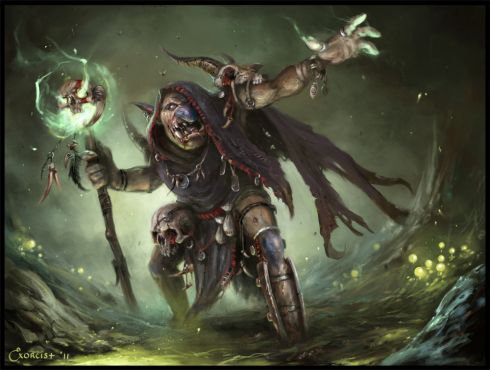 It is a memorable experience for young persons to visit a settlement for the first time. They will return again when they are granted a coming of age ceremony, stipulating that they are able to defend their people in war. At such times, brides are exchanged with other clans while portents and auspices are read. Goblins are minimally religious, with most of their ceremonies being concerned with future events and the request for security from their enemies.

Common goblins will be proficient in a single weapon. Among those in settlements, this will be a spear, but among wandering clans this will be a club. Few will have received any training, though war parties will be hardened. A goblin's armour class is naturally 6; commoners will carry shields when fighting and will not wear armour, so that their AC will be 5.

Leaders & Sub-chiefs have studied motivation, and will have amateur sage abilities related to this knowledge, improving the morale of those they lead. There is a 1 in 4 chance that a sub-chief will be mounted upon a dire wolf. Leaders will have two proficiencies, club and spear, whereas sub-chiefs will have three; this will be a short bow. Leaders will wear leather armour; sub-chiefs will commonly possess studded leather and a shield as well.

Chieftains have authority-status knowledge of motivation and typically an amateur-status knowledge of puissance also. They will have weapon proficiencies in spear, mace and bow; most will be armoured in studded leather and shield, but 1 in 4 may possess a suit of scale mail rather than leather. Most have an intelligence of 12 or higher. If the chieftain of a chiefdom or nation, they will be attended by a goblin shaman (a multi-classed fighter/mage), whose level will be half that of the chieftain.