Hobgoblins are tall, slender humanoid creatures with stiff, leathery hides sparsely covered with thin, black hair, with facial characteristics and attributes that suggest an Oriental appearance. It is almost certain that their original appearance has been altered by the presence of human Asian heritage in their background, as these creatures mated with the Tunguskic peoples who were completely supplanted thousands of years ago. Hobgoblins are intelligent and exceptionally heirarchical; they are the masters of a vast area of north central Asia known as the Vostoch Empire. 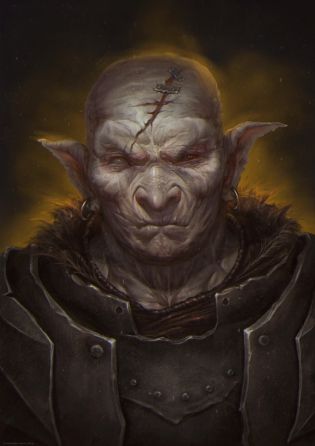 According to the Baykal Stele, the 73 ft. monument erected east of Vosba-Limma on the shores of Lake Baykal, a group of Fifty Tribes emerged from the Kodar Gate in a single migration, travelling southeastward until reaching the land where the Ankara River leaves Lake Baykal. Though numbering only 7,500, throughout the Paleolithic period they spread to occupy lowlands throughout the Yenisey, Ankara and Lena valleys. Conflicts between them and the dwarves of Altslok reach far back before written or even oral history. Hobgoblins fought aggressively with other migrants from Kodar: with norkers and xvarts in the east; and with orcs, haruchai and ogres in the south. They reached a truce with the bugbears who settled in Nissi An, to the north, and with the gnolls of Samoyadia. Their numbers had always included thousands of enslaved goblins (who would later escape far to the west to the lands of Magloshkagok). When kobalds from the south tried to settle in their lands, these were eradicated and nearly destroyed.

Surviving Tunguskic humans were driven south and east, forming the Jurchen people, who would later become the Jin and thereafter the Manchus. It has long been suspected that the Manchus benefitted from hobgoblin ancestors, but the accusation, even through the use of divination, remains suspect. While hobgoblins are intensely disliked by their neighbours, they are also respected for their military prowess, organization and efficiency in times of war; as a race, they possess a war machine that surpasses its rivals, except the dwarves, who remain the hobgoblin's most hated enemy.

Hobgoblins are able to produce healthy offspring through incestral practices, so that the practice of marrying siblings or near cousins is institutionalized. Children are raised and trained by every member of the tribe, ensuring a hive-minded ideal with regards to obedience and philosophy. Hobgoblins carry the eggs of their young up until a week before they are hatched, at which time a single egg is brought forth. Hobgoblins require 6-7 years to mature as combatants and are able to mate one year later. The hobgoblin's lifespan is about 35 years. They possess infravision and make good use of their olfactory senses as well as their sight. They are well-suited to the extremely cold climate of their homeland, which produces some of the coldest weather anywhere on Earth.

Hobgoblins are a collective people, preferring to inhabit areas as a tribe and maintaining continuous, close contact with their people. They have a deep respect for hierarchical status and possess a strong belief in the common good of themselves and their kin. This is part of what brings them together as a people and makes them dangerous as a foe. Individually, they are not as individually powerful as their enemies; but their prowess together has proven its worth.

For this reason, hobgoblins dwell in close knit agrarian villages which are heavily fortified and well-patrolled. It is rare to find an isolated clan of these humanoids. When first encountered, it will usually be a clan-sized scouting party organized under a single leader, acting as reconnaissance for a much larger war party or an entire tribe that is on the move. In times of war, it is sometimes ordered that hobgoblins will abandon their villages following a harvest and march as whole chiefdoms with the intent of driving enemies off or engaging in plundering raids. The lands of north Asia speak of two or three thousand hobgoblins on the march, unexpectedly appearing on the horizon as a portent of doom.

Large hobgoblin cities, like Vosba-Limma, Jaxalla or Yaxjasso, have huge stone walls that are more than a thousand years old, that have never been successfully sieged. Trade is carried on between times of war, for hobgoblins rarely hold grudges; while they are ready to war against any of their neighbours, they are just as ready to understand the value of increasing their strength and opportunities through diplomacy, good judgement and mercantilism. A few travellers have ventured into their lands, to find hobgoblins are learned, intelligent and sensible. They take pride in building monoliths of enormous size, though they are not especially religious or sentimental. It is the achievement that moves them, rather than some representation of the mystical.

Hobgoblins are not subterranean beings, though they are often assumed to be, due to their similarity to the much smaller goblin, with which they are related. 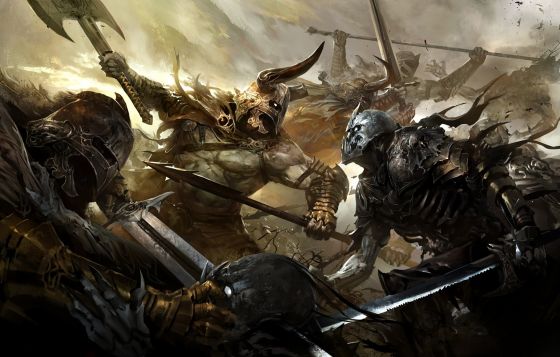 Common Hobgoblins will be proficient in two weapons, a spear and a wooden club. They will have received some training, to ready their spears as a formation to be hurled, before rushing in with the club. Hobgoblins have a very high natural armour class and commoners will make use of this by keeping their equipment light and wearing leather armour (AC 3); they do not use shields. Before a battle they will plant two other spears, which they will retreat towards if the battle goes hard.

Leaders & Sub-chiefs have studied motivation and will have amateur sage abilities related to this knowledge, so that common hobgoblins under their authority will fight as a cadre, will sacrifice themselves, will obey orders and will always work to attack the most dangerous threat on the battlefield. There is a 1 in 4 chance that a leader will be supported by a common bugbear acting as a personal guard; for sub-chiefs this chance is raised to 1 in 3. When either is present in a battle, the hobgoblins will have with them a tribal standard, which will grant them +1 on their attack rolls and +1 to their morale.

Chieftains have authority-status knowledge of motivation, increasing the morale given by a tribal standard to +2, with other sage abilities. They will always be supported by 1-3 bugbears as personal attendants. A chieftain will have proficiencies in bastard sword, mace, bow and glaive, and will be armoured in scale mail and shield (AC 0). Most have an intelligence of 14 or higher. As leaders, they will approach the tactical situation of any combat with skill, preparation and the appropriate amount of caution. They will never view their warriors as a single chesspiece, but will plan artful combinations that will bring them victory.