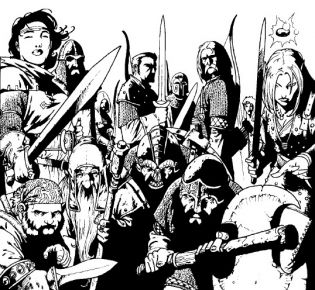 In creating a character, following the determination of ability stats and choosing a character class, it's time for the player to decide upon the character’s race. Available options for race include dwarves, elves, gnomes, half-elves, halflings, half-orcs and humans. The six non-human races in this list are known collectively as "demi-humans."

Each has advantages and disadvantages. Some are smaller, with less mass and hit points, and are not an option for some character classes. Others lack multiple special abilities and skills. Some are supported by vast networks of nations and social cultures. Others are outcasts in virtually every land. Players should consider what works best for them, and feel free to choose a race based on personal preference, rather than as "the best" option.

The right-hand table indicates what races can be assigned to which classes. Where the table shows a blank, that class is unavailable for that race. Contrary to rules in AD&D, the experience level limit for demi-humans is equal to humans. Additionally, there are no racial ability score minimums or maximums, as AD&D proposed.

Other races than those indicated above are not available for player characters. However, non-player humanoids of all kinds are usually able to progress as fighters and thieves, and sometimes as assassins, clerics or mages. Bards, druids, illusionists, monks, paladins and rangers are rare among races not allowed for player characters.