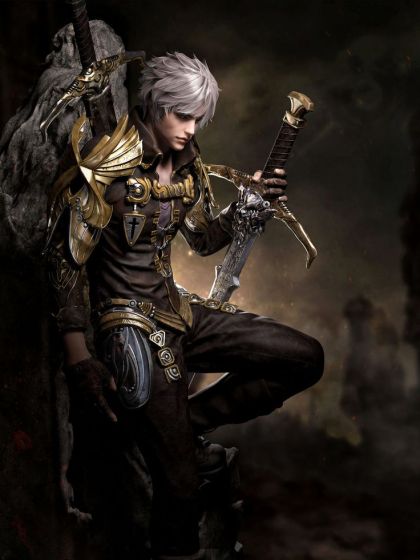 The most common character class, fighter is a general designation for all those primarily motivated towards hand-to-hand combat, protection, defence, war and open plunder. As the universal combatant, fighters both protect the kingdom and threaten it. They busy themselves with the science of weapons and armour, while challenging themselves physically with athletics, physical determination and fortitude against the elements.

Fighters are found everywhere, taking up professions that defend the wealth of the rich or the safety of citizens. They appear as leaders, commanders, pirates, guards, town watchmen and even common soldier farmers, ready to take up arms should another war present itself. With a tradition rich in gallantry, valour, courage and grit, fighters never need to doubt their cultural importance as the ox upon which the state rests.

To Become a Fighter

The primary attribute of the fighter is strength. Fighters may be dwarves, elves, gnomes, half-elves, halflings, half-orcs and humans.

To become a fighter, a character must have these minimum ability stats:

Multi-classed fighters must have a minimum strength of 15. To gain a +10% experience bonus, the fighter must have a minimum strength of 16. The table shown describes the necessary experience to claim each level of the fighter, gaining hit dice and further abilities. Each level above 11th requires 250,000 additional experience. Fighters gain 3 hit points per level above 9th, but as this is not an increase in hit dice, further constitution bonuses are not accrued. Fighters cannot progress beyond 29th level.

Fighters possess unique combat abilities and sage abilities. Players wishing to become a fighter should familiarize themselves with these characteristics.