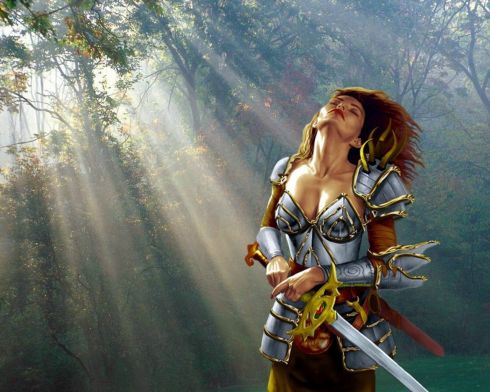 Experience points (x.p.) are assigned by how much weapon damage the character takes and causes. The system promotes risk-taking. Taking damage is considered more enlightening than causing damage, and so the total ratio of experience rewarded is 4:1 in favour of taking damage rather than causing it. Part of this is a substantial reward for observers who see the damage taken — so that persons who "take part" in a combat, even if they take or cause no damage, are still able gain a small share of the overall experience rewarded. The system makes an effort to reward those who act in concert and are ready to take hits for one another. See below for a definition of taking part.

20 x.p. is awarded for each hit point (h.p.) that the combatant takes.

10 x.p. is awarded for each h.p. that the combatant causes.

20 additional x.p. is awarded for the total damage that the friendly side takes in damage. This Bonus Experience is shared among all the combatants who have taken part, with henchmen, followers, retainers and hirelings receiving a lesser share.

Receiving experience does not depend on actually killing an enemy. So long as damage is either taken or caused, experience is rewarded, regardless of the outcome of the combat.

This seems to punish Hector, as he did all the work fighting off the enemy. However, clearly Hector already knows how to fight, so doing what he knows isn’t really "gaining" experience. On the other hand, Iolanthe learns to be careful about getting in the way of the enemy’s weapons; her learning experience has been deeper. Jules was both lucky and unlucky, but at least he learned something by taking part.

To receive bonus experience for taking part, the combatant must either roll to hit, using missiles or hand-to-hand weapons, or casting a spell; or they must be attacked at some point, thereby risking life and limb. If either has occurred at least once in a combat, the combatant is considered to have taken part. Actually hitting or being hit is not necessary. Obvuiously, it is better to risk being hit, and to take damage, than it is to hang back safely in an attempt to do damage. The distribution therefore punishes cowards and spellcasters who refuse to engage when combat occurs.

If a combatant has no actual chance of hitting an enemy, due to the enemy's armour class or natural defenses (hit only by magic, for instance), combatants are not considered to have taken part unless they submit themselves to attack. This may seem pointless, but damage taken by a weaker opponent can be seen as a sacrifice, enabling a stronger ally to act more effectively for not having taken damage that round. This kind of sacrifice is awarded due experience for that reason.

Therefore, characters of low level in a mixed party can therefore participate meaningfully, taking hits (and experience) through bravery and sacrifice. Consider what this means to a 1st level fighter who joins a 6th level party; while the 1st level may be able to take only one hit, the experience gained would be a substantial amount to the 1st level, and the treasure received after the fact would likely boost the fighter to 2nd level. In this way a low-level player character can quickly jump levels towards becoming effective.

Experience is also gained through the acquisition of coins, gems, jewellery and other treasure, measured in gold pieces (g.p.). Treasure is defined as wealth gained through plunder, or for services rendered, when those services include risk to life and limb. Experience from treasure is awarded at a rate of 1 x.p. per 1 g.p.

Some suspension of belief is required, but in game terms the system allows the players to reward characters themselves for acting appropriately or with great courage. If some players consistently hang back and take few risks, the rest of the party can arbitrarily decide not to share out treasure and x.p. for that reason. This is an essential part of the game's payoff for risks taken. The game has no rules dictating how treasure is to be shared out, because it is expected the players will invent their own method.

Experience is also received for magic items that are found as treasure. Each item is assigned an experience bonus that the character receives. Magic items have no gold piece value.

X.P. from the Use of Magic

Magic spells that cause damage to specific creatures over time should grant 10 x.p. per h.p. This includes spells such as cause light wounds, chromatic orb, dust devil, fire trap, heat metal, insect plague, magic missile, magic stone, Melf's arrow, phantasmal bow, spike stones and spiritual hammer, among like spells. The x.p. of "shared spells," like magic stone, is split between the user and the caster.

This method does not apply to spells that instantly cause damage to non-specific areas of creatures, such as burning hands or fireball. In these cases, the damage is calculated in two ways:

1. Calculate the total damage caused to all those affected by the spell and multiply this by 3 x.p. 2. Take the victim that suffered the most damage and multiply that by 10 x.p.

The larger number is then awarded to the spellcaster. For example, Korin the Mage delivers a fireball that causes 21 damage to four creatures. If two of these make save (half damage equals 10), then Korin has caused a total of 62 damage. According #1 above, the total would be 186 x.p. However, two of the creatures suffered 21 damage each; according to #2 above, this total would be 210 x.p. Korin therefore receives the latter of these totals for using his fireball.

Other area effect spells, such as meteor shower, which gives a different amount of damage to those affected, would always have the 3 x.p. award applied to all the damage that was caused.

If a spell causes death to a combatant, without the damage being specified, such as with the spells death, phantasmal killer, or power word: kill, then the spellcaster is awarded 10 x.p. for every hit point the victim possessed.

If a spell or ability increases the combat effectiveness of a friendly recipient, such as chant, enlarge, flame blade, prayer, strength or martial spirit, then x.p. from the damage caused specific to the spell is shared between the recipient and the caster. For example, Leo the Thief gains +1 damage from Matthew the cleric's prayer spell and causes 5+1 damage to an enemy. From this hit, Leo would receive 50 x.p. for the damage he would have done anyway, and 5 x.p. from Matthew's contribution. While Matthew would receive only 5 x.p. from this one hit, presumedly Matthew would receive similar shares from other members throughout the party.

In a case such as flame blade, which would enable a combatant to hit creatures that are only hit by magic, all the x.p. from damage would be divided between the recipient and the caster, because without the caster the recipient wouldn't be able to do damage at all. 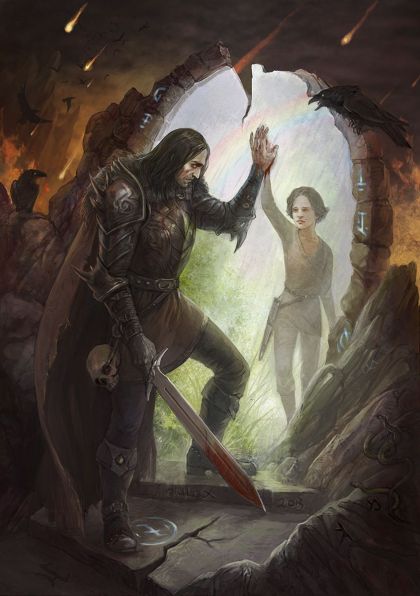 Finally, there are spells that provide hit points that can be lost by the recipient, such as armour and phantom armour. For experience purposes, these spells are treated exactly like ordinary damage taken, awarding 20 x.p. per point. This x.p. is not shared by the caster.

When a particularly difficult goal is reached, one that has taken upwards of 10 or more game sessions to achieve, including months and months of effort, then at the DM's discretion an addition x.p. bonus may be awarded. This takes the form of adding 5%, 10% or 20% to the player character's current x.p. total. For example, a character with a total of 34,000 x.p., given a 10% award, would increase their x.p. to 37,400. These bonuses are given in addition to treasure and other experience that might accrue at the end of such an adventure, and are given very rarely.

This jump is applied likewise to everyone in the party, players and NPCs alike, so that each person’s increase is balanced across the whole party, regardless of original level or class.

When dividing experience between the party's main characters and others who take part, always assign 1 Share of the bonus experience to each lead player character. Direct henchmen receive ½ share; henchmen of henchmen should receive a share half that, or ¼ share.

Healing has no effect on experience, except that it provides hit points that may afterwards be lost in combat. A character could therefore gain experience for more hit points lost in damage than the character had in total, if healing occurred during that combat.