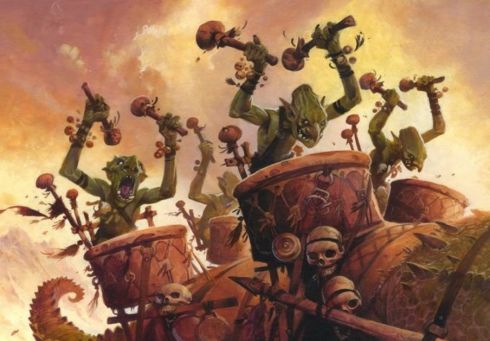 Martial Spirit is a bardic ability to inspire nearby combatants to ferocity and valour, through music or speech, during combat. Because bards are gifted with the power to animate others, all bards are able to rouse the spirit of their fellows through encouragement, granting a bonus of +1 to hit, damage and morale to all within 12 hexes of the bard.

Upon deciding to do so, amidst a battle the bard declares their intention to boister their companions — and while doing so, the bard is unable to take any other action. If the bard is able to play an instrument, music can be used to convey martial spirit; but otherwise, the bard can give voice to exhorting others to fight harder, better and more courageously. This can be done for three rounds, +1 round per level of the bard, per day. As it is an ability, and not a spell, the bard may encourage continuously until the time is used up, or each round of encouragement can be spaced throughout one or more battles. The only requirement is that the bard should announce at the start of the round that they are committing their full action to martial spirit, whereupon all nearby companions can take advantage of the benefit.

While doing so, the bard is free to use 1 action point to move, striding warily or at a walk. The bard may not run or sprint.