Contrary to old texts, Character Classes are not professions and they do not indicate pursuits and curiosities that excite the attention of character. These are activities and diversions that arise once characters begin to make their way in the world. A character class comes as a result of systematic education and training, designed to produce adaptable skills that can be applied to professions and interests.

For humans, training for a given class most commonly begins at age 9 or 10. Elves will start earlier; most classes will spend half their lives in the profession of their family before commencing some kind of training. For non-humans, adult training is usually arranged through the village, who selects a candidate to receive training to become a level. As an example, dwarven clerics commonly do not become selected until past the age of 50. This is why dwarven clerics begin the game when they are old. 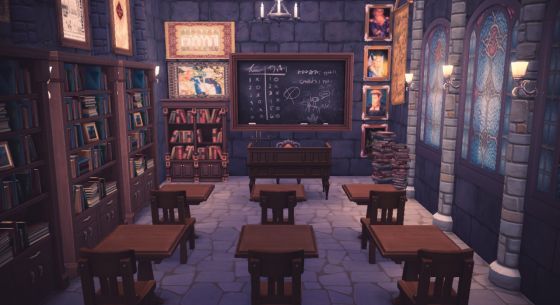 Human children, however, are selected by the means of their families to pay professional instructors. The child must show aptitude for the class, but as they are not fully developed there is no expectation that minimum ability stats are met. Most parents do not have the means to have their children receive this training; those in wealthy and important professions can manage it nicely, but the only alternative for many is to opt for an apprenticeship. These are much sought after and hard to obtain. It's understood that player characters are something of an elite, simply because they had an opportunity to receive training.

Depending on the class, training lasts from between 5 and 30 years, the lengthier periods being most common for illusionists and mages. The casting of this sort of magic is so difficult that it can be 4-7 years before the student can manage a cantrip. An entire language, and not an easy one, must also be learned. Most become apprentices after their principle training, which requires about 8 years. Thereafter, they may remain apprentices well into adulthood, until they crack the difficulty of casting spells sufficiently well to become levelled.

With thieves and assassins, the training is often scattered and inconsistent, with much time spent as layabouts or minor criminal participants. Time in gaols, if not prison, or in poor houses, will account for the time it takes to become one of these classes.

Bards, too, will be distracted, commonly acting as an apprentice, then a journeyman, with plenty of practice before finally reaching levelled status. It is not uncommon for them to spend time in a guild or a troop before setting out on their own.

Druids and Monks, after a different fashion, will each receive their training after 6 to 7 years. Thereafter, they must contemplate what they've learned for five years or more. Each of these classes requires a moment of enlightenment before the level is actually obtained; this last step cannot be trained, it must be perceived.

Clerics are trained in seminaries, where they will be given a diploma after 7 to 8 years of training. From thence they will join a church or temple, where they will participate as curates, assistants, associate deacons or in some other formal capacity for as long as 7 or 8 years. When they are ready, they will receive a dispensation from their religion to seek their own path, but they remain an unattached part of the organisation that trained them, and may appeal to this organisation later in life if they wish to obtain greater status.

The easiest training is given to fighters. Children will take between 5 and 8 years; but veterans who already have combat training and have acquired experience directly from battle, either as comrades or men-at-arms, can receive the training necessary to become levelled in as little as one year. Many, however, are seriously injured or even killed during this training. Nevertheless, this explains why there are so many fighters compared to other character classes.

Rangers and Paladins learn their fighting skills in the same amount of time; but much of their additional training involves considerable meditation, walking in the footsteps of wiser persons "in the field" as it were, and establishing a mindset that will eventually allow the casting of druidic and clerical magic.

No additional stat bonuses are given to adults who start their training to become 1st level monks.

With children there are considerable changes to their ability stats, related to their growing to maturity. A set number of dice are rolled each year that a child grows, both prior to and after training; after training starts, these rolls are more selective to ability stats the student needs. If, during the course of training, the student does not acquire sufficient ability stats to meet the class minimums by 15, then the student fails and can only become levelled through training they receive as an adult (and almost certainly as a fighter).