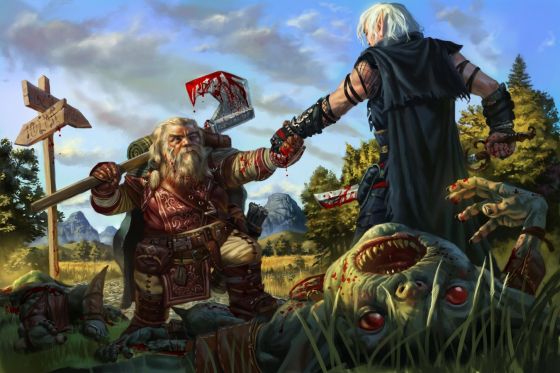 Followers are non-player characters (NPCs) who form an attachment to powerful characters and beings, agreeing to follow them as friends. They usually receive a share of whatever treasure is gained, but they do not work for a wage — making them distinct from hirelings. Followers are sometimes misconstrued with retainers, who are loyal servants that are attracted to levelled persons who obtain name level.

Followers will be collected throughout the campaign. Some may be collected through the character's background as childhood friends, or as loyal servants of the family who no longer require pay. Some may be met on the road, where they might agree to throw in with the players for safety's sake; others might be NPCs whom the players rescue, or who hire the players and grow attached to them. A monster may be a follower; the players may make followers of humanoids who are traditional enemies. Followers may remain for life or they may drift in and out of the players' lives. The trustworthiness and morale of a follower towards the party depends on how he or she is treated. If the players are honest, forthright and have shown a willingness to share and sacrifice themselves for an NPC, that NPC may choose (in the DM's opinion) to become a follower. In truth, there is no limit to how many followers the players might possess; but it is hard to give enough attention to a many NPCs at one time.

Followers separated from the party will worry over the party's welfare; if the party is lost, they may raise a search party or seek some other means of communication. Followers can appear in the nick of time, saving the party from a massacre. Followers may be persons of reputation and means, who can say a word on the party's behalf or proffer a loan. One time followers may well rise to a position of authority, the benefits of which they'll share with the party they knew in those good old days, when adventure was the only thing that mattered. It is good to have friends.

A spurned follower, one who is mistreated, whose counsel is mocked or whose priorities are trampled upon, can become a deadly enemy. An ex-follower is far more dangerous than some random NPC the party once slighted. An ex-follower was invested once; and now they're hurt, misused and bitter. If there is anyone who might want to hire an assassin to kill a member of the party, it's almost certainly an ex-follower that the party felt it was okay to betray.

Obviously, the DM should not frivolously assign followers to the party, or make too much of some small rebuff on a player's part. Additionally, DMs must not use a follower to "run the party." The greatest contribution a follower should offer might be a tiny addition to a plan already intended by the party. Followers should offer knowledge but a minimum of insight. Followers are not there to problem-solve for the party. They "follow." They do not lead.