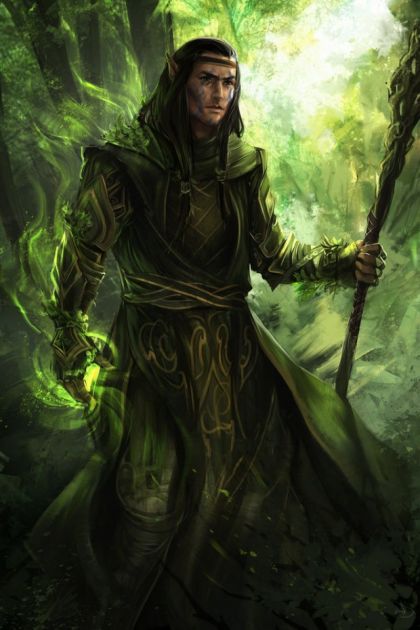 The traditional game has always attempted to ascribe to druids a reverence for nature, and to insist that they must not concern themselves with the affairs of demi-humankind, remaining neutral in such matters. Historically, very little is known of them: they were Celtic in origin; they opposed the spread of Christianity and monotheism, being polytheistic in their perception of the world; they worshipped certain trees and animals; and finally, they retained the ancient knowledge of medicine, astronomy and ritual throughout Europe’s Dark Age.

In D&D, the druid’s particular spirituality is not guided by the presence of a fixed and established hierarchy. There are no druidic churches, only holy shrines at which no structured ceremony occurs. Druids take their guidance from the natural course of events; winter into spring, summer into autumn … and independently assess where best to apply their knowledge in order to bring about a better world. They are free from the eternal battles of god versus god; they do not advance into battle to destroy one god to propagate another. All exists in the same structural construct. The druid does not see that it is important who, or what holds power within the construct—all power is the same. Nor does the druid seek “balance” in order to protect the construct—the construct has never been threatened in all the millions of years of its existence.

The druid’s primary purpose is to encourage others to renounce the wasteful efforts to accumulate power, wealth or even knowledge. All that is necessary to obtain happiness is to contemplate the natural world, to cease to be a burden upon it, and to live upon it. There is no greater good than the growth of things, or the act of eating things that have grown, or of cultivating in a manner that nature grows wild yet serves to sustain the dweller that resides within. A life lived simply, eschewing destruction, ending in a death which further encourages greater growth, is the highest ideal.

Innovation and creativity is beautiful where one hand creates, but when a thing makes slaves of a hundred hands, or a thousand, that thing is ugly. A baker bakes bread, or a candlestick maker fashions a candle, and such is the mastery of nature encouraged. But a wall breaks the backs of those who make it and keeps out life.

A druid must see the world and defeat it in his or her own manner—thus the player is encouraged to decide for themselves what nature needs to thrive the better. There is not druidical church to tell them … only other more powerful druids carrying forth their own agendas to make the world more fruitful and to be at peace.

To Become a Druid

The primary attribute of the druid is wisdom. Druids may be half-elves, halflings and human.

To become a druid, a character must have these minimum ability stats:

Multi-classed druids must have a minimum wisdom of 15. To gain a +10% experience (x.p.) bonus, the druid must have both a minimum wisdom and charisma of 16. The table shown describes the necessary experience to claim each level of the druid, gaining hit dice and further abilities. Druids gain 1 hit points per level above 15th, but as this is not an increase in hit dice, further constitution bonuses are not accrued. Druids cannot progress beyond 23rd level.

Contrary to myth, druids are not required to compete with or challenge higher level druids upon attaining levels. There are no limits as to how many druids may exist at a given level. Due to this change, and other benefits, total x.p. required by druids in my game world has been raised by 20%.

Druids receive druid spells at each level. They also possess unique combat abilities and sage abilities. Players wishing to become a druid should familiarize themselves with these characteristics. Druids are +1 to hit with missile weapons during starlight conditions.