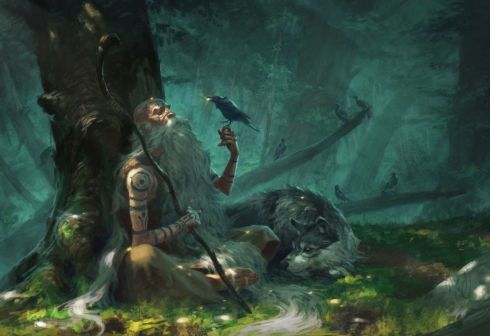 A class of persons who practice a life of asceticism and mindfulness, often — but not always — for religious reasons. Contrary to common belief, the class is not limited to Far Eastern philosophies, but has adherents within Jewish and Islamic cults, the Jesuits, the Knights Templar and outliers of the original gnostics and magi reaching back to the 3rd century. Monks are merely persons who have chosen to strengthen and hone the body while living a life of contemplation and self-awareness.

The monk's path enables a greater awareness of the universe, which allows specific abilities and skills unavailable to other classes. In the game world, just as magic has transformed many societies, the powers available to monks likewise bring a change to our perception of the Western monastery. The Cistercians, Benedictines and Dominicans are not clerics — no more than are the Buddhist monks of lamaseries in Tibet and China, not within D&D.

But while most monks have decided to devote themselves to religion, no monk need do so. The monk's power is not bestowed from the gods, but comes from within. It is the monk’s choice to dedicate that power to whomever, or whatever, seems best.

To Become a Monk

The primary attribute of the monk is wisdom. Monks may be human.

To become a monk, a character must have these minimum ability stats:

Unlike other classes, due to their style of fighting, the monk gains no strength bonuses to hit in hand-to-hand combat or to damage. Likewise, the monk’s dexterity provides no armour class adjustment. Dexterity does provide normal bonuses to initiative and to hit with hurled or fired missiles.

Multi-classed monks must have a minimum wisdom of 16. Monks gain no experience bonuses. The table shown describes the necessary experience to claim each level of the monk, gaining hit dice and further abilities. Monks cannot progress beyond 17th level.

Monks start with two hit dice (d6), so that they accumulate 18 hit dice over 17 levels. A normal constitution bonus is applied to both hit dice when calculating initial hit points.

Contrary to myth, monks are not required to compete with or challenge higher level monks upon attaining levels. There are no limits as to how many monks may exist at a given level.

Monks possess unique combat abilities and sage abilities. Players wishing to become a monk should familiarize themselves with these characteristics. All monks are able to perform [[Open Hand (ability)|open hand], a form of unarmed attack. They have a natural armour class of 9 rather than 10, and they possess 6 action points, one more than most.