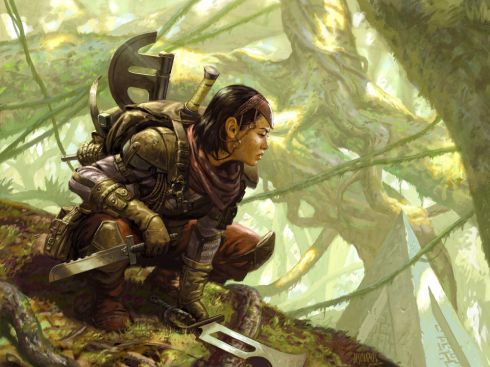 Some with fighting abilities seek a quieter, healthy existence, where solitude, contemplation and a closeness to nature is possible. These souls cherish self-reliance, simplicity, and adherence to higher laws than those of humanoids. To them, "wealth" is preservation of the land, and "love" is the self-restraint while enduring the threats that nature offers. A ranger is tied to the land — not only that of the wild, but of ways an individual can sustain themselves upon simple crops and cultivation, foraging from the land and knowing the land, while acting as a caretaker of that land.

Rangers are found in all sorts of professions, as wardens and foresters. As guides, hunters and scouts, fisher folk and explorers, rangers are a helpmeet for those in trouble. As reconnaissance leaders in military units, taking part in raids and infiltration behind enemy lines, they are the eyes and ears of an army. And as contemplative private citizens, they want no more than to hear the sounds of birds — and the absence of noisy carts, shouting voices and church bells.

To Become a Ranger

The primary attribute of the ranger is strength. Rangers may be elves, half-elves and human.

To become a ranger, a character must have these minimum ability stats:

Multi-classed rangers must have a minimum strength of 15. To gain a +10% experience bonus, the ranger must have both a minimum strength and intelligence of 16. The table shown describes the necessary experience to claim each level of the ranger, gaining hit dice and further abilities. Each level above 13th requires 325,000 additional experience. Rangers gain 3 hit points per level above 10th, but as this is not an increase in hit dice, further constitution bonuses are not accrued. Rangers cannot progress beyond 26th level. [experience table]

Note that rangers start with two hit dice, so that they accumulate 11 hit dice over 10 levels. A normal constitution bonus is applied to both hit dice when calculating initial hit points.

Rangers are +1 to hit with missile weapons during full or dim moonlight conditions.

Rangers begin to receive limited spellcasting abilities at 8th level. Rangers possess unique combat abilities and sage abilities. Players wishing to become a ranger should familiarize themselves with these characteristics.