These guardian demonesses occupy the upper levels of the Abyss, acting both as guards imprisoning the denizens within and as a shield against interlopers from other planes. Should an interloper seek to enter the Abyss for some purpose, they would be sure to meet with one or more marilith before long.

Standing 7 ft. tall, marilith appear from the waist up as highly athletic and beautiful human women with six arms; from the waist down, they have the body of a giant snake. The length of the lower body is some 15 to 18 ft., usually curled under the creature’s body as support. 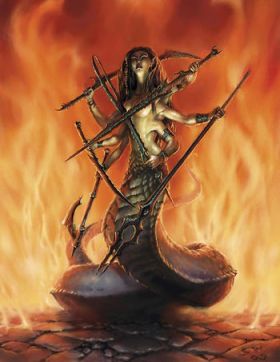 Marilith are armed with six weapons, typically a short sword, a rapier, three varieties of scimitar and an ankus — but this is by no means the rule. The power and dexterity of the demoness is frightening, as it is able to deliver all six attacks against a single opponent, if the creature so wishes. Moreover, marilith have an 18/51 strength, with +2 to hit and +3 to damage, so that six hits by the demoness can deliver a minimum of 24 points of damage and as many as 54.

It is supposed, inaccurately by many historiographers, that marilith are generals, advisors or tacticians, all of which ignores the true chaotic nature of the Abyss, within which no true hierarchy exists. Marilith are compulsively driven to be destructive; they are devious and crafty, and careful to plan their first attack to obtain the best possible advantage — but they do not command other demons, as many false sages believe.

Their existence reaches back tens of thousands of years to a time unknown, as it predates history. The first mention of a marilith occurs in the Ramayana. They are described as servants of Ravana and his demoness sister Shurpanakha, who fought and lost the war against Rama, circa 2500 BCE. Thereafter, the marilith were barred from free action upon the Prime Material Plane and cast into the Abyss, where they have remained ever since.

In addition to their strength, Marilith are immune to sleep and charm, whatever the source, as well as attacks from cold, fire, electricity or gas of any sort. They are able to teleport. They are able to be hit only by weapons with a bonus of +1 or greater. They possess a natural ultravision. They are able to produce darkness at will, encircling their selves with a 20 ft. radius of inky blackness, which can be dispelled only with dispel magic. They have a very high magic resistance of 80%.

Marilith are also able to charm person, detect invisibility, levitate and pyrotechnics. They are able to create an avatar. All these abilities can be performed at will, requiring only 1 action point to perform. However, no more than one such power may be performed per combat round. Most may be performed from round to round, but a given power can’t be put into place if already present.

Marilith may not possess creatures that are aware of what they are facing; however, an unconscious creature may be possessed and used as an outer shell to protect the demoness.

Most often, summoned marilith are nearly impossible to control, being extraordinarily possessed by the desire to indiscriminately slaughter friend and foe alike. However, they love the prospect of being released upon an earthly battlefield and may be encouraged to fight against an unsuspecting enemy. The “contract” this may create will last so long as the marilith’s allies give it plenty of room and do not inadvertently kill or disable a would-be victim of the demoness. It is therefore not safe to intentionally or accidentally attack any creature within three combat hexes of a marilith.

As the demoness knows that its death on the Prime Material will mean only that it is returned the Abyss, which it views without regret. Therefore, a marilith facing hundreds of foes may cheerfully fall into a blood rage, that will continue until the marilith is vanquished, or the enemy are dead. Since it can teleport at will, even the flight of victims will not save them from the marilith’s appetite.

Those who falsely believe it is safe to summon a marilith, to kill only a few score enemy, will sorely regret their decision. Unless there are at least a half a thousand enemy immediately visible to the demoness, it will immediately set itself to kill everyone in its presence, beginning with the summoner if possible.