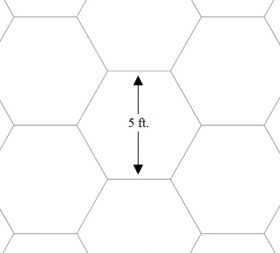 Combat Hexes are used when calculating movement during combat. Each hex has a diameter of 5 ft., which is "held" by combatants against opponents. With the exception of some rules related to charging, grappling and overbearing, enemy combatants cannot enter a defender's hex unless that defender is reduced to unconsciousness, killed or forced back.

All hexes immediately adjacent to a combatant's hex are subject to attack with most hand-held weapons. Pole-arms are able to attack two combat hexes away. Rules regarding the effect that a combatant has upon adjacent hexes is described under melee. For rules related to the number of combatants in a hex, see multiple defenders in one hex and puissance. For the number of hexes a combatant requires due to its size, see size of creatures. The effort to cross a combat hex during melee at a wary stride costs 1 action point.