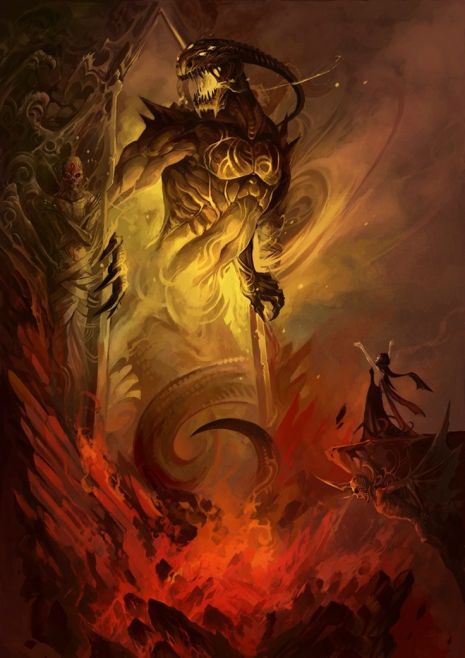 Chthonic describes deities and spirits of the "underworld," or Lower Planes of Existence, known for their intensity of malevolence. While traditionally chronicled as "evil" or "chaotic," a more precise delineation is to view the ideology and philosophy pervating the chthonic realm is one of dark, infernal hatred and ongoing resentment. The tradition of torturing the souls of the wicked in an eternal afterlife of torment is familiar to most; but the greater scheme is to wreak the same torment upon the virtuous as well. Since only a narrow boundary exists between the lower planes and Prime Material, or even with the upper planes, it requires constant vigilance by the righteous to maintain the status quo, lest the life world be harrowed as a field of wheat.

Hard as it may be to grasp, the substance of the chthonic universe and the beings which inhabit it are immutable; the lower realms can never be destroyed or brought to heal; the power within them is as great as the power of the "Apollonian" realm, that of decency and righteousness. The balance is maintained by the center — the living beings of the Prime Material whose belief, manifested as religion, gives power to each side of the eternal struggle.

As a consequence, beings in the Prime Material may obtain their power as easily from the Chthonic as from the Apollonian ... and should enough beings seek power from the former, then the gates will be opened, the world will collapse into torment and the new line of siege will be established at the gates of the Upper Planes of Existence, rather than where the line stands now.

There will always be individuals ready to trade away the world to obtain personal power — and chthonic beings lurk in wait for such people, granting them their desires knowing the day will come when those same benefactors will feast on the traitorous, avaricious and corrupt. These horrific beings have tremendous power to give, and are ready to give it more freely than Apollonian beings. Additionally, each small dark victory in the wide world weakens the more austere opposition — to where even the disparate, dog-eat-dog wanton masses of the underworld can one day find the way to break their chains.

Communication is established through the sage study of Dweomercraft, which can empower player characters into dalliances with the dark forces — or know enough to confound those forces when encountered. Like the beings with whom dweomercraft communicates, this knowledge can never be truly eradicated, though many have tried. It opens the door to the character's pursuit of malice and profanity, if this is their wish.

Creatures Known to Be Chthonic