Hezrou are loathsome toad-shaped demons, dwelling in the Abyssal swamps, mires and muskeg pits, notoriously devoid of free-standing water. These muck-and-slime expanses fill the bottom of hollows and chasms on every plane of the Abyss, growing deeper and more polluted as one goes deeper. In these places, these creatures feed eternally on the damned, chewing and disgorging them over and over, until they're transformed into hideous deformities. 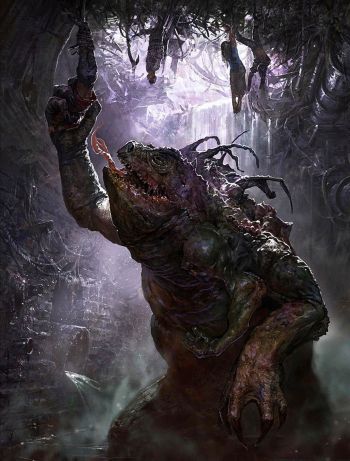 Upon occasion, these horrific places create a momentary breach into the Prime Material, enabling a Hezrou and some its dark matter to pour forth into the fissures beneath dungeons and unholy places. As these demons are content to pass centuries in passive regurgitation, it's only as their spawn begins to appear on the world's face that anyone thinks to investigate and eventually exterminate the fiends responsible.

Hezrou have a great many defenses and forms of attack, most of which can be performed "at will," which means by expending 1 action point (AP). However, no more than one of these attacks can be employed per combat round. A power cannot be employed again if it's already active.

Hezrou are immune to sleep, charm and curses, as well as from cold, fire, electricity or gas-based attacks. They can only be hit by magical weapons.

These demons have a strong magic resistance of 55%. They possess a natural ultravision, so that they can see perfectly in normal darkness, even deep underground.

If pressed, or if they wish to cripple their opponents, hezrou are able to produce a magical darkness at will, encircling themselves with a 20 ft. radius of inky blackness. This darkness is much more powerful than the mortal dweomer, as it can't be countered with a light or continual light spell; only dispel magic can dismiss it. As they can detect invisible objects, they can easily locate their enemies in this dweomer, for it favours them and not ordinary mortals.

The hezrou's main attack is its maw, which differs from that of a toad since it possesses a row of inch-long rasp-like teeth. The hezrou likes to divide its attacks against multiple opponents, striking with its maw against whatever enemy caused the greatest, most recent damage.

It's favoured attack is to teleport at will and attack creatures from the flank or rear — even with an 8 intelligence, hezrou know well enough that enemies without armour are frequently spellcasters, and so these are often targeted early in a fight. If faced with a large enemy, the hezrou uses its telekinesis to hurl rocks, collapse ceiling blocks or hurl the enemy aside.

Against a large number of foes, the hezrou likes to cause fear, to reduce the numbers threatening it. As it often dwells at the bottom of a muck-filled crevasse, it will use levitate to protect itself, before gating in another hezrou; this it can do with only a 20% chance per round.

When faced with a solitary enemy, the hezrou always seeks to demoniacally possess the victim. Once it seizes control of a mortal body, the hezrou swims to the bottom of its muck pool until the human body is dead and bloated. Then it forsakes the possessed victim and begins to consume its soul.