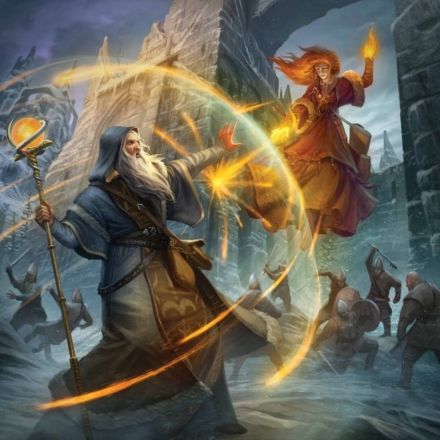 Also known as an incantation, a spell is a means of controlling unnatural power in order to cause an effect. The acquisition, casting and discharging of a spell is a complex formula that certain classes are able to manage ~ though often generally spoken of as “magic,” there are in fact five forms of spellcasting: bardic, clerical, druidical, illusionary and magical, as cast by bards, clerics, druids, illusionists and mages. These are known by the general terms, “spellcasters” or simply, “casters.”

Spells are acquired through characters gaining levels and choosing spells from a list that can be found by following the links of the spell-using classes above. Different spellcasters receive different numbers of spells as they advance in level. Clerics and druids gain bonus spells through wisdom. Mages have many choices, but these choices are limited by the mage’s intelligence. Illusionists and mages both gain cantrips as well as spells. Some spellcasters have considerable more power than others, and the amount of experience needed to go up a level often reflects this. A spell may not be duplicated (i.e., the caster cannot possess two or more of the same spell at the same time).

On a daily basis, casters must reacquire spells they have used, a process often described as “forgetting” and “relearning” spells. Sometimes the latter is called memorizing a spell. The specifics for "memorize" should be taken figuratively.

When a caster is organizing a spell in their mind, the process is like putting together a complex thought-puzzle, in which various mental pieces are fitted together in a fashion that can’t be fully understood by a non-spell using perspective. This process of mental manipulation is the art that spellcasters are taught for so many years before they succeed in becoming 1st level in their class. Moreover, the puzzle-making is different for each form of magic, so that a cleric cannot cast magical spells, having no more knowledge of how magical spells work than a fighter does. The process of assembling this puzzle takes time and must be done once fully rested.

Once the spell is in mentally place, it will remain there until it is intentionally dismantled, no matter how long that is. The caster knows the key order of phrases and thoughts that will dismantle the spell’s mental structure, enabling the spell to be employed and thus “forgotten” in the caster’s mind. To regain the spell, constructing it once again, requires a night of rest (minimum six hours). The caster simply cannot obtain the clarity and sensibility to reform the complex mind-puzzle once again without this rest.

The time necessary to reform a spell in the caster’s head, or to either “learn” or “memorize” it (the terms mean the same thing), is 15 minutes per spell level. Thus, a third level spell requires 45 minutes to learn as a spellcaster. Cantrips are considered half-spells, so each requires 7½ minutes to learn. The learning process requires concentration and cannot be interrupted; if it is interrupted, the caster must begin anew, with any previous effort being considered lost.

Bards weave spells through performance or contemplation, depending upon the form of art which they practice. The mental structuring of the spell is similar to that which is described above; the bard dances or sings, feels a mastery over materials, juggles, writes or mumbles poetic lines … each amounts to the same thing, the slow puzzling together of spells so that they will be ready to cast. In each case, the focus is most likely an instrument of some kind, a tool or the bard’s own body, depending on the specific art. 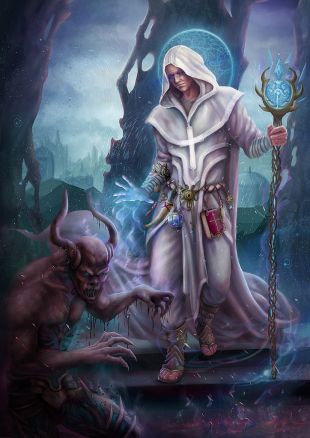 Clerics pray fervently to gods or demi-gods for the necessary time period, while feeling the passion of these superior powers filling their minds and hearts. In effect, it is as though the cleric were a bottle being filled; once the spell is in place, the cleric mentally places a stopper over the top of the bottle and the spell’s power remains held within the cleric, until the metaphorical stopper is removed.

Any number of gods in a cleric’s pantheon may be called upon for specific spells; generally which god provides which spell is not pre-determined, but the character can be given this information if it is requested. A monotheistic character may still pray to more than one source. A Christian may pray to God, Jesus, Mother Mary or any number of Saints. A Moslem may pray to Allah or call upon the spirit of Mohammed. Most religions are flexible in this manner. Naturally it is presumed that the cleric should seek to serve these deities and maintain their favour, since the cleric’s spell use depends upon it.

Druids seek to commune with the natural world on a deeper level than the five senses will reveal. In a way that’s difficult to explain, the druid becomes supernaturally aware of the movement of energy, living things, water and earth all around ~ even the heat and magma far beneath the world’s crust. This tremendous power is “tapped,” or gathered by the druid as the complicated form of the spell is constructed in the druid’s mind. These natural, elemental or even “astral” forces are always present, and therefore remain always available to the druid when forming spells for use.

Illusionists & Mages, who possess spells of greater power, rely upon spellbooks to store the complexity of their magic. To learn their spells, they must study the pages of these books. Illusionists and mages depend greatly upon the maintenance and care of these books; losing a spellbook is a very unfortunate affair.

Once a spell is acquired and learned, to unleash the spell it must first be cast. Casting is a time-sensitive process that must be done with great concentration and without interruption. If a spell’s casting is interrupted, and the caster’s attention is broken, even if for an instant, the effort to learn the spell is lost and the spell cannot be discharged. “Breaking” a spell while it is being cast can require as little effort as thumping a caster hard on the shoulder, giving them a push or shouting very loudly in their ear (though the last may allow an ability check for the caster’s primary attribute). Needless to say, damage from combat or some other source, an earthquake, a rush of water or heavy rain, a gust of wind or similar circumstance will also break a spell as it is being cast.

As such, spellcasters are very careful only to cast spells when they are fairly sure they will not be interrupted while doing so. This is made more difficult in that all spells have distinctly obvious verbal and somatic components. These cannot simply be performed subtly ~ they must be performed resolutely and at the appropriate volume, which means that any witnessing intelligent creature will know perfectly well that the spellcaster is “weaving” a spell (another way to describe casting). This will probably mean that an enemy will forego attacking a mere fighter a few feet away, preferring to hurl a dagger at the spellcaster to break the spell before it is ready.

Because of the nature of casting, the caster cannot dodge such an attack. In fact, the caster must be minimally conscious about what is going on all around, as the spell is everything. Therefore, if an attack is made against the caster, the caster’s dexterity is not applied to the caster’s armour class.

Take note that an ally who enters or passes through the combat hex containing a spellcaster must make an intelligence check to avoid disrupting the caster and ruining the spell. A +4 modifier is granted to this check.

1st and 2nd level spells usually require a full round to cast. As spells increase in power, they take more rounds to cast. Some spells, specifically not designed for the battlefield, may take hours to cast. Most cantrips take only a few action points in order to cast.

While casting, spellcasters are allowed to move no more than 1 combat hex per round, provided the ground is distinctly flat and free of obstacles. A caster would be presumed to trip over roots if attempting to move while weaving a spell amidst trees. Likewise, a caster could not move through water, or spy around a corner before walking into full view. A caster cannot perform any action with their hands, or use their voice to speak, as these are taken up with the process of casting the spell.

With cantrips, the time of both casting and discharging is included in the casting time, describe on each cantrip.

On the threshold between casting a spell and discharging it, the caster may “hold” the spell for the right moment. While the spell is held, the caster continues to be vulnerable in the same manner as during the process of casting. However, with certain spells, the exact moment of discharge can be very important.

Cantrips cannot be held in the manner of spells.

Causing a spell to manifest itself in actuality is called “discharging,” or releasing the spell from within the spellcaster. Once discharged, the effects of a spell are real and cannot be taken back.

Spells do not require material components.

Gaining a new spell upon reaching a new level presupposes that the character has already given that spell a great deal of thought. They have memories of teachers explaining things to them about magic that have not yet taken root in the spellcaster’s mind. However, at the moment of reaching a level, the caster is assumed to have obtained an epiphany. At last, they understand the words of their teachers and comprehend how the spell is ordered in the mind, or otherwise obtained. This empowers the caster to expand their spells.