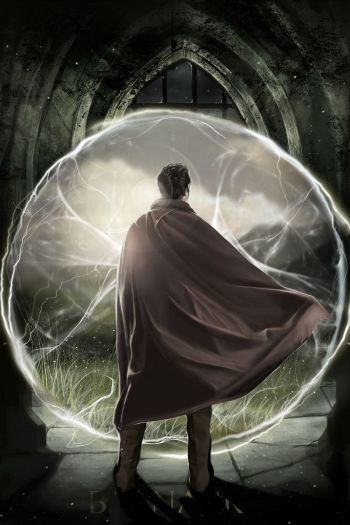 Teleport enables the caster to instantly transport to another location, with considerable accuracy if the place is familiar and with a fair probability if the place is not. Distance is not a factor, but the spell cannot be used to travel from one plane of existence to another.

While the caster will be able to teleport up to one creature per level, all such creatures must be held or must link hands in a chain. While equipment that's carried can also be teleported, the weight of this equipment is limited to 100 lbs. per person. For example, the caster would be able to teleport a horse; and a rider on the horse would be considered as a separate creature; but neither the rider or the horse could be loaded with more than 100 lbs. of weight, with the horse exempting the rider and the rider's burden when calculating the limit.

Weight over and above this limitation would be randomly left behind when the spell was cast, if it were not purposefully discarded beforehand.

Success indicates the caster has teleported to the locality desired. If the caster is familiar with the area, the teleport with bring the caster and others to the exact spot desired.

A miss indicates that the caster has missed their destination. The distance is indicated in blocks or hexes, as indicated. A "block" equals 145 yards; a "build hex," 1,304 yards. The remaining hexes are more or less self-explanatory. The number of units that the destination is missed by equals the % that the caster rolled above the number needed for success. For example, if the caster were teleporting to a place that was seen casually, and rolled a "92," then the caster would rematerialize at a place four 2-mile hexes from where the caster intended — in a random 360° direction.

A random result indicates that the teleport has gone utterly awry, so that it will randomly deposit the character at some unknown place on the globe. This will mean that the caster need to merely wait a single day before casting the spell again, though it will be inconvenient.

Any result must place the caster upon dry, solid ground or at the very least upon the deck of a ship in mid-ocean; the character could not appear in the path of a lava flow or amidst a tsunami. However, this does not preclude the possible effects of weather where the caster might materialize, nor does it protect the caster from what unfriendlies might be encountered at the final destination, whether intended or not.