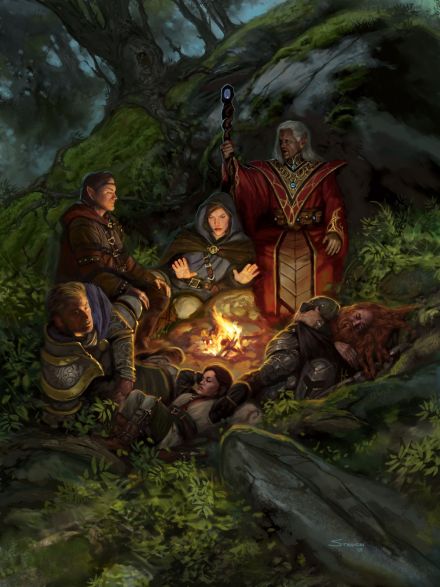 There are a few hundred intelligent species that exist in the world, many of which — humanoid and non-humanoid — have created societies of some kind. Some societies are very small, mere pockets of habitation existing in subterranean regions or highly isolated wilderness areas. Other societies are huge, comprising empires. Between are endless kingdoms, republics, principalities, duchies and so on. Each has staked out their territory — and where the territory conflicts with its neighbors, borders are agreed upon and, sometimes, challenged.

All these societies compete for land, trade, military and religious superiority, the spread of their culture and in other less important ways. This competition produces a certain degree of antipathy; often, following an collection of violent historical incidents, outright hatred.

That said, the proposed racially-based hatred that was codified in AD&D is NOT a relevant consideration in my game world. The dwarves in the world have little or nothing to do with the world’s elves; and while orcs have threatened many human cultures in Asia and eastern Europe, they’re almost unknown in western Europe and Africa. Half-orcs, therefore, might be distrusted in some parts of the world but simply treated as a stranger elsewhere. Unless there region has a specific reason to feel antipathy, the more likely response to a player character's race, player or non-player, is apathy.

Because my world takes place in Earth's 17th century, only a fool would trust another person merely on the basis of race, even a countryman. National pride is unheard of; and a member of one’s own race can be easily as villainous as anyone.

Therefore, race plays a very small part in the relations of my game world. Race is merely physical appearance, or a set of inborn talents — and nothing more. An odd person of another heritage might draw curiosity, even enmity, but an directed hatred is unlikely.