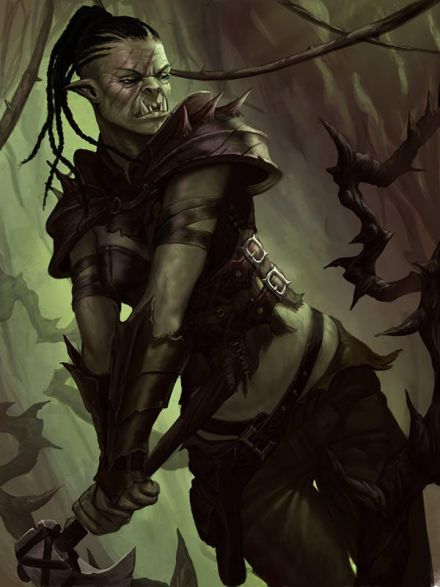 Born of an orc father and either a human or a dwarvish mother, the appellation “half-orc” is that of an outsider. Orc women cannot be impregnated in like fashion, and no other race is sexually compatible with orcs. The resultant offspring retain a mutation that causes the half-orc variant to become dominant, so that if a half-orc that breeds with either a human, dwarf or orc, the half-orc strain will remain dominant and emerge in the progeny.

Among themselves, they are known more commonly as Cumans or Cumani (human-orc) or dworkin (dwarvish-orc). These peoples live side by side in a region called the Sanjak of Cumana, located north of the Black Sea.

The Cumani are related to the human Pechenegs, who were annihilated and ceased to exist as a people in the 12th century. The Cumans originated somewhere in the lands north of Lake Balkhash in Turkestan. They began to move westward after the 800s CE, displacing the Khazars, Pechenegs and Oghuz Turks along the valleys of the Volga and the Don rivers. They raided the Kiyevans, Hungary and the Byzantine Empire in the 11th century. For a time, the Cumans occupied a vast realm stretching from the lower Dnieper to the Urals, but with the arrival of the Mongols this power was obliterated and the Cumans were scattered. They gathered as a conquered people under the Mongols for two centuries, when they successfully gained control of their present-day lands between 1420 and 1441. Thereafter the Cumani have often fought with Russians, Ottomans and Kiyevans to retain their homeland, with hard-won success.

The Dworkin originated in the south lands of modern Mugodstan, where they still exist as a minority. In physique they resemble other half-orcs, but they have many dwarvish habits. Physical characteristics show the shape of their hands and the lack of a typical orcish nose, common among Cumani. The Dworkin were driven westward by the Mongols, in a series of short-lived migrations between the 1190s until 1230. They joined with the Cumani at that time, and were likewise conquered and forced to submit under the Mongol Batu Khan in 1238-39. Most Dworkin today dwell in the Het of Donbass, in eastern Cumana.

Cumani half-orcs have a strong muscular appearance with loose skin that creates a series of folds on their necks, upper arms and bellies, a feature that many will keep hidden when not among their own people, as human observers often find the feature disconcerting, even ugly. Cumani have raised gorilla-like nostrils and jutting lower jaws, usually with lower incisors that can be seen when the half-orc’s mouth is closed.

Dworkin half-orcs are deep-set eyes and flat, wide noses, and stiff-haired beards that grow like spines. They lack the loose skin around their necks but it still features upon their upper arms, bellies and upper thighs.

All half-orcs males average between 5 ft. 3 in. and 8 in. in height, much shorter than their orc forebears. Females tend to be 3 to 4 inches shorter than the males. They possess considerable musculature, however, and are usually stronger and healthier than humans. They weigh between 140 and 180 lbs.

Most have straight, oily hair that ranges from sooty and jet black to bluish black. Common eye colors are turquoise and hazel; considered most attractive among their people are pink eyes, with either green or grey flecks, or pale pink, sometimes verging on nearly white.

Player characters choosing this race gain a +1 strength and a +1 constitution, with a -2 charisma. They also possess infravision, being able to see in the dark with relative clarity.

Half-orcs have a limited range of classes available to them, with training as assassins, clerics, fighters, and thieves.