Haruchai are an aggressive race of robust, close-knit humanoids related to orcs, who in various ways rule over an area in central Asia that is nearly the size of Europe. Locally, they are known by many names: Oirot, Kuan Chu, Jagatai, Tatars, Mongols or Manchu. In some parts, most notably along the northern fringe of the Gobi Desert, they are tribal and resentful of other peoples; but in vast regions they act as a noble class, ruling over cavewights, orcs and ogres. They possess wide and sharp, hatchet-shaped facial features; as shown, they favour growing out their long, straight hair. Their lower teeth grow throughout their lifetimes, so that those with four or more teeth protruding above their upper lips are generally older and more experienced. 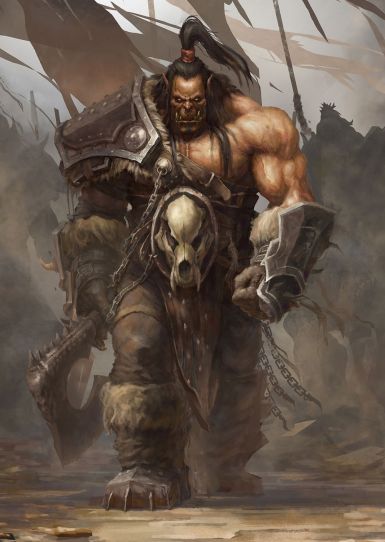 Haruchai settlements began to emerge about 8,000 years ago with the development of the yurt and domesticated cattle and yak-raising. With the practice of agriculture about 2500-3000, their number increased. A series of wars in the early Bronze Age, circa 2200, with northern hobgoblins and flinds, and with the dwarves of Altslok. Chinese to the south described them as "northern barbarians" beginning with the 8th century BC. During this period they were called the Donghu by outsiders. Between that period and the 300s AD, various confederations and dynasties arose among the haruchai, as they spread westward towards Sinkiang and later through the Dzungarian Gate.

Warring with Turks and other groups, the western haruchai (Oirots) drove these peoples out and occupied their lands. This initiated a wave of barbarians migrating across the Asian steppe, pushing forward Huns, Slavs, Avars and Khazars, later Cumans and Pechenegs, and finally the Turks themselves. In the 10th century, the orcish Khitan peoples were broken and fled west; they settled along the Balkhash between 1100 and 1200, but their presence infuriated the haruchai. Following a 20-year war with Altslok, in which the dwarves held their own, the "Mongol haruchai" were organized under Genghis Khan — who, turning west, destroyed the Khitai along with other lesser peoples. Khwarezmia, Samarkand, Georgia, Kiev, Russia and the Volga Bulgars were smashed and conquered in their turn, establishing haruchai as foreign Padishahs over Persia, Russia and the consolidated Jagatai Empire. By 1279, they had conquered the Song dynasty, bringing China under the control of haruchai overlords until 1368.

The main outward regions of this vast empire have collapsed in the last two hundred years; Moskovy continues to defend its frontier along the Volga against haruchai-orc lands, having failed to hurl these peoples back across the Ural mountains. Persia has been consolidated under the Safavids. Following the conquest of Afghanistan and Central Asia by Tamerlane, a haruchai, these regions have been consolidated under the Mughals, founded by Tamerlane's great-great-great-grandson Babur (who, with his descendents, are a mixed human and orcish bloodline, with the latter much diminished through breeding). Yet in Central Asia, there remain many independent empires and kingdoms that, though lacking unity, continue to hold a tight grip upon a vast area. In each of these, the warring spirit of haruchai continues to foment border wars and unrest in a wide circle of potentially peaceful nations, due to the fear that another Genghis or Tamerlane may arise with each new generation.

Haruchai females are equally aggressive as males, but after their 15th year, they are possessed with a fierce passion every 18-34 months, most commonly during the dead of winter. This manifests as a delirious frenzy, one that is sometimes murderous; whereupon she will search for a male until successfully copulating. However, if the male found is not strong enough, the attempt will often end in the male's death before the joining is achieved. Upon learning of the female's need, males will often present themselves to the female to test their personal virility; in many tribes, the male is not granted any authority until they have withstood a haruchai female's passion. It is not unusual for exceptionally strong females to be overpowered and hobbled before a mating is attempted — though no male admits to this practice.

Gestation is almost certain, resulting in fraternal twins more often than a single offspring. Females will typically carry to term four or five times in their life before the frenzy no longer possesses them. Haruchai become able to fight effectively after age 12 or 13; they rarely live beyond the age of 65.

Though organized as clans, haruchai identify themselves more often with their tribe than with their immediate family. Hunting parties often consist of more than one clan acting together, so that the number of hunters may be 40 or more. Their tactics often involve killing more than the clan can eat, as the amount of food brought it offers prestige. Several tribes together form a chiefdom called a "banner." Banners may wage war independently against small groups, or several banners may join together under a khan to wage war on a massive scale.

When at war, they will unhesitatingly kill innocent persons, often en masse, gathering them together in groups and then indulging in a killing ecstasy that may last for several days, if the number of victims allows. It is for this reason that they are feared by outsiders. They have no kindness or loyalty towards the lesser races that serve them, and especially are fond of bullying orcs; they have great respect for the cleverness and cruelty of cavewights, who often act as chieftains over a tribe of haruchai.

Tribes, which consist of two or more clans, will be led by a sub-chief. Clans will include 2-3 leaders.

Common haruchai will be proficient in two weapons. As troops will almost always be mounted on horses, these weapons will be spear and short bow, with about one quarter being able to fire their bow from the saddle. Riding a mount should be treated as a minimum requirement for haruchai. In combat, most will wear leather armour without a shield, adjusting their natural armour class (AC) to 3.

Leaders and other levelled haruchai will be assassins, fighters and rangers, and will most likely choose to study murder, puissance and scouting, each of which will define their roles, and the roles of their clans and tribes, during times of warfare. Leaders will have either three or four proficiencies, favouring a glaive, long sword (2-8 damage) or dagger in addition to spear and short bow. All will be able to fight with bow from horseback, as will stronger haruchai. Their horses will be light to medium warhorses and will possess leather barding. Haruchai leaders will dress in studded leather armour (called the "kuyak"). Half their number will also be attended by 1-3 war dogs, which are trained to run alongside horses.