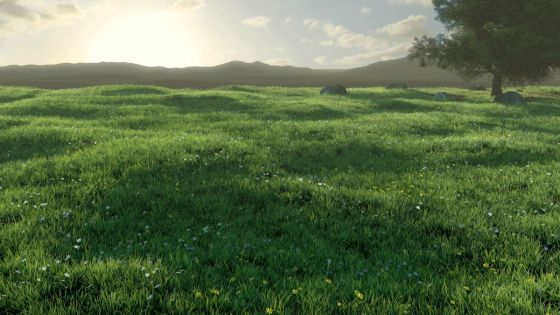 Steppelands or prairies are characterized by temperate grassland plains lacking trees, except in places directly adjacent to rivers, lakes and sloughs, where underground water touches the land surface. A steppe may be semi-arid (arid steppelands with sparse grass are called [[Barrens (range)|barrens]) or covered with grass and low shrubs, or with both, depending on the season and latitude. The climate of steppelands is too dry to support a woodland, but not dry enough to be a barrens or desert. The edges of some steppelands have enough water to provide scattered trees and copses, called "mixed steppe." Steppelands in subtropical and tropical climes are identified as savanna.

Steppe features hot summers and cold winters, with the predominant rainfall during the spring. The amount of snowfall varies in winter. Ground cover from snow varies from a thin covering where the climate is dry, to an enduring accumulation of several feet in moister regions. In areas of extensive cultivation, ground evaporation has some effect on the weather. Steppelands tend to have excellent soil and are highly desirable for settlement, though the initial ten-year period of planting and readying the land can be daunting.

Natural vegetation can be extraordinarily dense and the lack of windbreaks brings a resulting exposure to the wind and storms that makes travel and finding shelter very difficult. Settlers often plant fast-growing brushwood as a windbreak, along with coniferous trees that may take 6-10 years to supplant the former brush. Farms tend to be isolated, depending on singular wells, with settlements forming where groundwater is plentiful. Seasonal insect plagues can eat whole crops, while periods of drought do occur, turning the land into a desert for up to several years at a time. However, bumper staple crops will produce vast amounts of food, so that these areas tend to be "breadbaskets" for other parts of the world.

In winter, the steppe can be extremely unpleasant. The lack of physical features is made worse by blizzarding winds and "white out" conditions that may persist for days. In clear skies, the ground retains little to no heat, so that the temperature can drop to arctic and even polar temperatures, persisting for as long as a month or more in some parts. In summer, the grass becomes lush and green, with butterflies, spectacular fields full of flowers and the smell of fresh, clean area. The intensity of the winters will usually mean the absence of even small reptiles or spiders. Giant flying insects do occur, but their lairs can be avoided with skill. Large mammals proliferate on the grass that grows quickly and abundantly.

Below is a list of the most extensive steppelands in the world:

Below is a list of elements and features that are common to steppeland ranges:

The following monsters are common to steppeland ranges: