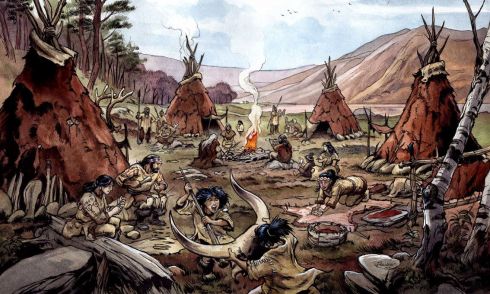 Clans are groups of humanoids united by actual or perceived family descent. They typically number between 20 and 50 members. In primitive regions, these are hunter-gatherers, but are more familiar as cottagers who collect to form an agricultural hamlet. The clan exists as a smaller, integral part of a larger society, such as a tribe, chiefdom, nation or kingdom. As important part of the clan's integrity, marriages between members of one clan usually involve an exchange with other clans. With some humanoids, matrilineal, the male surrenders their former clan and indentifies as a member of the new clan. In patrilineal societies, it is the female who surrenders her former clan.

Clans are led by single persons, siblings or an agreement of elders, depending on how many "leaders" are present. A leader is a levelled character who has reached at least 1st level — usually as a fighter — through combat and experience rather than traditional fighter training. Because clans have a loose organisation, and because there will usually be more than one leader, their power structure is usually egalitarian. Attempts to control others by force would be met with aggression and disobedience.

Nominally, therefore, a single leader may be recognized as the strongest member and be called "headman" or "headwoman" — the nominal leader of the clan. Two leaders may be "siblings," either in fact or in name, together calling themselves "headmen" or women while sharing authority. The headman or woman may not be the strongest levelled character; perhaps intelligence or wisdom is prized by the elders.

It is the headman's role to carry forward custom, give consent to the day's activity and most important to give recognition to those in the clan who have acted well. The role is supportive and giving, and not dictatorial.

For lack of a more universal term, braves are non-levelled clan warriors who yet possess hit points in excess of ¾ the maximum possible for their hit dice. For example, a humanoid who received d8 hit points per hit die could be counted a "brave" if they had 7 or 8 hit points (6 would be equal to ¾ exactly, and would therefore not be enough for a brave). A clan's war party consists of all the braves and one chosen leader. While braves participate in hunts, they usually act as beaters, as they are most likely to meet with the prey face-to-face as it is driven into the open. They are respected as the bravest. Daily activities include scouting, making of tools and hunting journeys of 2-8 days that take them far from camp.

These dutiful, steady members of the clan will possess better than ⅜ the maximum hit points possible, up to ¾. They are trusted to bring down prey when it is driven out, and act as guards of the clan's encampment in times of trouble. They do not engage in raiding, but will take part in tribal war parties. They are respected as the strongest pillar of the community. Daily activities include hunting, fishing, gathering. 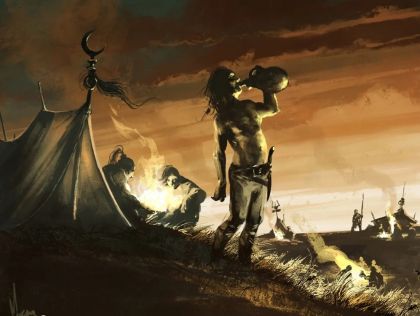 These members include elders who are too old and weak to perform tasks requiring a great deal of movement or heavy labour, or children too young to work as caretakers. As a consequence, the perform light tasks, such as mending. Both groups are limited in number, as in difficult times the clan cannot afford to support either group. Because of the difficulties of raising and carrying infants, primitive cultures will practice birth control and child exposure, spacing the birth children and committing infanticide when food is lacking. Old persons will self-sacrifice, abandoning the clan at such times. They have no set daily activities.

Shamans are rare, but 1 in 3 clans will count one shaman among their "dependents." Shamans are primitive practitions of magic who possess no training in the use of spells or cantrips. They effect magic by reaching an altered state of consciousness, allowing them to commune with the natural order and invoke wild magic to achieve their aims. Shamans will possess random hit points (treat as a 1st level cleric). Daily activities include light tasks, meditation and gathering herbs. Singing or playing an instrument is common.

Though nominally independent, clans will gather for festivals at set times of the year, usually with the change in season or marking an important religious event. In civilized regions, clans from several hamlets will gather, sometimes at a specific hamlet and sometimes where nature has provided a meeting place, such as a dell or lakeside, or an island not far offshore. At these events, marriages are consummated following a match-making ritual, trading is accomplished and shamans will meet and share knowledge and discoveries. In any tribal meeting there will be at least one shaman, who may separate from their clan and join another as needed.

Tribes consist of 2-5 traditional clans, led by a chieftain and two sub-chiefs, who will form one additional clan with 1-4 leaders and additional individuals as described above. Tribal war parties are organized only in times of war with other tribes or races. They will consist of 1 leader from each of 3-6 clans, every available brave and 9 out of 10 hunters.